Looking at the Latest "Rule of Three": Modular Weapons and (Non) Combat - Or - We Simply Aren't There Yet


and here you thought that answers to questions would give you definitive answers... 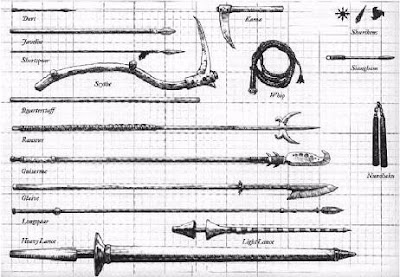 What thought, if any, have you given to deciding what modular rules go into the initial D&D Next release and what rules will be released in subsequent supplements?
I chose to answer this question because my answer is going to apply to the many, many product-related questions we get for Rule-of-Three. The work we're doing right now D&D Next isn't what you would call product development (yeah, but monday's post WAS about product development) ; we are not working on books, we're trying to create the game system that is going to be featured and expanded in various products (at this point in the game I'd hope they were closer to figuring out the system and moving to the next part.  guess not.  they really did give an extremely early beta to the players and DnD Experience and apparently haven't gotten much further). As such, there are many decisions about what goes into a product that we have not even started working on because it's far too early in the process (i call BS on this.  the products are the money makers.  they have an idea of what the initial products are going to be). While we've got a running list of optional and variant rules we can include (Hit locations! Lingering wounds! Hexes! Firearms!), and many of those will likely appear right alongside the base rules in whatever products we release, no decisions have been made as to what rules variants will go into particular products.

Are we going to see mostly weapons we're familiar with, doing the same range of damage from d4 to d12, or multiples of dice? Can we expect to see a return of weapon damage types as was mentioned in a previous conversation? Also, do you expect to see any exotic weapon choices in the core or is that something you'd like to hold off for a later release?
Yeah, I'm cheating by letting these three count as one question, but they're all related and allow for relatively simple answers. I think we want weapons to meet player expectations, and some of the basic things you mention (like weapons having varying but basic damage dice) meet those expectations and function well. One area where we might make some tweaks is trying to level the playing field on a lot of common weapons, because for many players, a weapon is an aesthetic choice, and it's kind of a drag to pick a weapon for aesthetic reasons only to find out your character is somehow hampered because you didn't make another, less aesthetically pleasing choice (this makes sense.  i think there was an issue of Dragon in the late 60s that had a chart like such, which also adjusted the damage dice by class). Also, yes, right now we're looking at typing weapon damage, just like we do with spell damage. So, a mace might do 1d8 bludgeoning damage, for example.

One of the things that people worry about is combat and non-combat abilities competing with each other. Are the designers/developers of D&D Next worried about this kind of thing, and if so, what are you doing to mitigate it?
In general, we want to make sure that everyone has a baseline level of competence in all three pillars of play (combat, interaction, and exploration, for those of you who haven't read previous Rule-of-Three articles) so that they can participate in adventures that use those game play pillars in different ratios. (i really don't feel comfortable watching my game get defined in such absolutes) We want players to have a lot of freedom when choosing what to focus on. For example, in 4E if a player wants to blow all of his feats on extra languages and Skill Focus, that's totally OK. Likewise, I play a 27th-level wizard (I still can't get used to the levels that characters reach in 4e) in Chris Perkins' Wednesday night game, and I get far more exciting use out of my utility spells than I do from my attack spells (I'm looking at you, time stop). If I could trade in some of my attack powers for more uses of utility powers, I totally would. So, when it comes to customization points, we want to let people choose what they want to focus on (be that combat, diplomacy, being the best liar ever, being a super stealthy thief, or whatever) and trust the baseline competence we've built into all characters to make sure everyone feels like they can participate. (i've been told that 4e is pretty much all combat abilities, and even what appears on the surface to be non-combat, requires a combat maneuver to set it off.  have the books.  tried to read them.  wanted to like them.  never played and have no desire.  that being said, it looks like they plan to put some "role play" back into the D&D game, so it can't be all bad)

Email ThisBlogThis!Share to TwitterShare to FacebookShare to Pinterest
Labels: Rule of Three