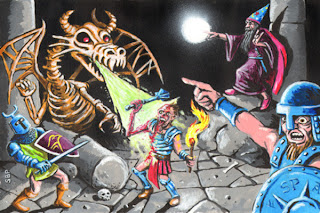 Greg Gillespie has opened up crowd funding for his Barrowmaze II project.  It went live last night, and is just short of raising $1k as I post this.  The goal is $4k, with stretch goals making the product even sweeter for supporters.

I really enjoyed Barrowmaze I (did I mention it's the number 3 seller at RPGNow as I post this?), and plan on slipping it into my upcoming ACKS campaign.  If all goes well, my party should be ready for Barrowmaze II when it releases in the fall.

Of course, I need to wait until I get paid on Friday before I can officially be a supporter.  So says she who must be obeyed ;)

Some basics from the Indigogo page about Barrowmaze II:

What is Barrowmaze II?

This indiegogo campaign is designed to support the creation of Barrowmaze II (BMII) and, while doing so, provide supporters with exclusive extras and cool bonus perks.


Barrowmaze II is the second part of a two-part exploration-style megadungeon for Labyrinth Lordand other classic fantasy role-playing games. BMII is a continuation of the initial "dungeon sprawl" concept presented in Barrowmaze I (BMI) and is intended for mid-and-high level characters.


BMI was a self-funded project published in early February for introductory to mid-level play. You can find it at rpgnow.


Barrowmaze I and II combine into one large megadungeon. However, they can also be played independently and are self-contained. You can find links, updates, fan-creations, and freebies at theBarrowmaze website.
Posted by Tenkar at 7:29 PM