The Original 7 - Dungeons & Dragons "White Box" - And So It Begins 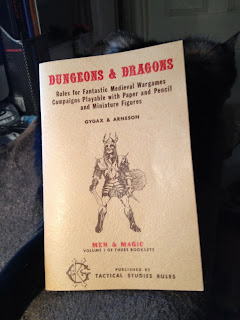 Before I actually started the process of delving neck deep into the Original 7 RPGs, I thought about the scholarly approach I was going to take.  Let me start right now by saying "that shit ain't happening!"  Or, it may, but only as circumstances permit.  I find myself enjoying my trip far too much to make this a purely scholarly project.

In any case, I've been working my way through Dungeons & Dragons Volume 1 - Men and Magic, and finding the nuggets that, to my eyes, are the most insightful.

Number of Players:  At least one referee and from four to fifty players can be handled in any single campaign, but the referee to player ratio should be about 1:20 or thereabouts.  (holy shit!  50 players?!?  1 ref to every 20 players ?!?  I have trouble running a game with more than 5 sitting at my table these days)

Elves:  They may use magic armor and still act as Magic-Users.  (as elves swapped out their classes, choosing between being fighters and magic-users in between adventures, the magic armor perk is pretty powerful)

Other Character Types:  There is no reason that players cannot be allowed to play as virtually anything, provided that they begin relatively weak and work up to the top, i.e., a player wishing to be a Dragon would have to begging as let us say, a "young" one and progress upwards in the usual manner, steps being predetermined by the campaign referee.  (hmmm... by the time AD&D was introduced, this little gem was forgotten.)

Strength gives no bonus to hit or damage.

6 levels of Magic-User spells and 5 levels of Cleric spells take up 11 1/2 pages.  About one spell level per page.  Digest sized.  How come we can't write stuff as concisely these days?
Posted by Tenkar at 8:51 PM