A Look at Jaws of the Six Serpents (PDQ System) 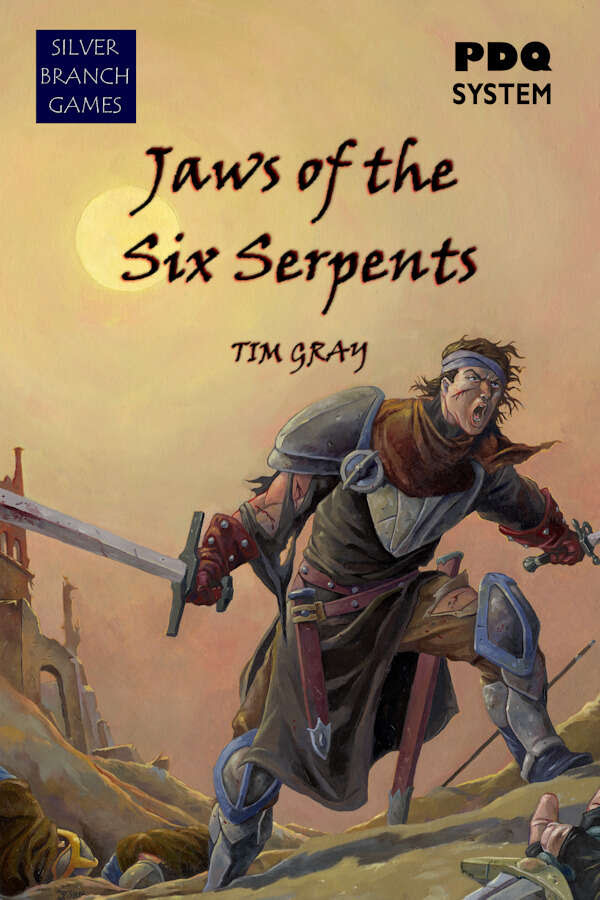 This isn't going to be a true review, some I'm not titling it as such (but will tag it as one, 'cause it's close enough).  I just got my softcover copy of Jaws of the Six Serpents - Silver Branch Games was offering a discount to those that had purchased the PDF copy of the game, and that certainly included me.

The PDQ System (which I first came across in Questers of the Middle Realms) one of those, dare I say it, Indie Game Systems.  PDQ - Prose Descriptive Qualities.  In this case it's almost like a structure red freeform type system - you define your characters standout traits and qualities (good and bad) using the included rules and distributing points and "Wallah!" you have a character.  It's pretty open and flexible.  Which means I'm sure it can be gamed by Munchkins, but then again, so can most systems out there.  All you need are a handful of D6, so it should be an easy enough system to grass if you can get past your D&D roots.  That shit always holds me back ;)

Anyhow, I really like the Swords & Sorcery feel of Jaws of the Six Serpents.  It does a great job in a relatively small amount of space (the entire book is about 130 pages).  I suspect it runs pretty quickly and painlessly with a GM that is conversant with the rules, which would make it a decent choice to run via a Virtual Table Top or Google+ Hangouts, as I've noticed, at least with VTTs, the games tend to run slower.  With voice or without, the pace slows from a face to face game.  With a system that runs fairly fast in the first place, that might be less of an issue.

You can check out the Core PDQ Rules for free here.
Posted by Tenkar at 8:19 PM

Email ThisBlogThis!Share to TwitterShare to FacebookShare to Pinterest
Labels: jaws of the six serpents, PDQ, Reviews, swords and sorcery