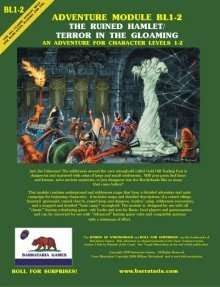 From the guy that brought us the Companion Expansion, we get the free adventure / starter area called The Ruined Hamlet / Terror in the Glooming for levels 1-3.

From what I can gather, the products being released for free at RPGNow have been sitting on the author's website for a bit previously.  So if you are someone that trolls the web looking for gaming goodies, you might have already come across this.  For the rest of us, this is new stuff.

If I have one complaint, and this applies to many of the adventures one gets in PDF format, is that the keyed maps are stuck in the back.  So I'm reading keyed descriptions without any idea where the corresponding map is.  Not a killer issue, but it is an annoyance.  I'd suggest if you are going to read this with an idea to run it, print the maps our for reference.

The maps themselves are serviceable, and there is even a blank map for use by the players, which is a nice touch (it's basically graph paper, but still, a nice touch).

The adventure assumes a silver standard (so something that would cost 10 GP in the rulebook will instead cost 10SP).  It does state, however, that expo is based on GOLD, not silver.  This may cause some leveling issues.

Into the Unknown! The wilderness around the cave stronghold called Gold Hill Trading Post is dangerous and scattered with ruins of large and small settlements. Will your party find fame and fortune, solve ancient mysteries, or just disappear into the Borderlands like so many that came before? This module contains underground and wilderness maps that form a detailed adventure and mini-campaign for beginning characters, including an abandoned village, haunted graveyard, ruined church, traders’ camp, wilderness encounters, and monster lairs. It also includes a ruined keep and dungeon as well as a mapped and detailed “base camp” stronghold.


The module is designed for use with all “classic” fantasy roleplaying game rulebooks or sets for Basic- and Expert-level players and gamemasters. It can be converted for use with “Advanced” fantasy game rules and compatible systems with a minimum of effort. Cover art by William McAusland! Print version available at www.barrataria.com
Posted by Tenkar at 10:20 AM