Bonus! On the First Day of Holiday Swag, My Bartender Gave to Me - Echoes of Olympus: A Novella 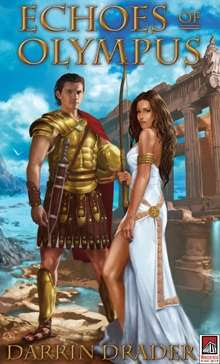 And yes, they offer some free stuff - or at least one free book so far.

Echoes of Olympus: A Novella - I haven't read it yet, but it's free, so it will be going on my Kindle.

Ebook Description
Heliodas, the Athenian born son of Zeus, rides to war in the armies of Alexander The Great of Macedonia in a bid to topple the Persian Empire, which has
threatened Greece for hundreds of years.
Thermiandra, the adopted princess of Cyme, struggles with a hidden secret too terrible to imagine. After receiving a vision from the Athena, she leaves her family and life of luxury behind to follow the goddesses call.
Demosthenes, the great orator and general of Athens, face must face treachery from his rival Lysiemon.
Echoes of Olympus: A Novella is the first seventy pages of a novel of the same name. It is historical fantasy set in an ancient Greece in which the Peloponnesian War did not take place.
About the Author
Darrin Drader currently works as a staff writer for 38 Studios, the video game company founded by famed Boston Red Sox pitcher Curt Schilling. Before entering into the electronic gaming field, he worked as a tabletop roleplaying game designer, and has written books for Dungeons and Dragons, Pathfinder, D20 Modern, Oathbound, Reign of Discordia, and others. He lives with his wife, four kids, two cats, and one temperamental chihuahua.
This book come in PDF, .mobi, and EPUB formats, which will enable it to be viewed on most readers, tablets, and computers.
Posted by Tenkar at 11:59 PM