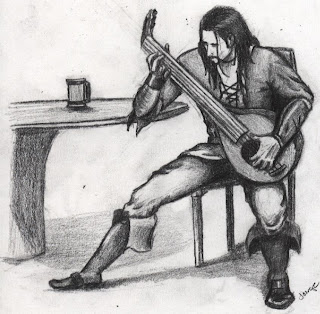 Geordieracer cost me about 90 minutes of sleep this morning.  I was foolish enough to check my phone for emails as I stumbled to the bathroom, and I caught his comments on the Bard I'm looking to write up.  Using a variation of the Cleric's turning table to affect the Bard's reaction from others is a nice twist.

S&W doesn't have a Morale Rating for monsters and NPCs, but I'd suggest a successful check against the table will encourage hirelings / henchmen to hold out just a little bit longer.  A "D" result may make them even stronger in their resolve, but you would still have to roll, and a "1" would still be a failure.

Same chart could be used to swing the natives more in your favor IF they can understand the Bard.  It could also be used to see if the Bard makes a little coin as the party stays at the local inn.

See what you did to me Geordiracer?  My precious sleep was stolen from me so I could think about THIS! heh...

Thanks GR, it was a great seed to get me thinking.  Keep 'em coming.