The Draconic Archeologist: What the Heck is an Anhkheg? - AKA The Dragon #5 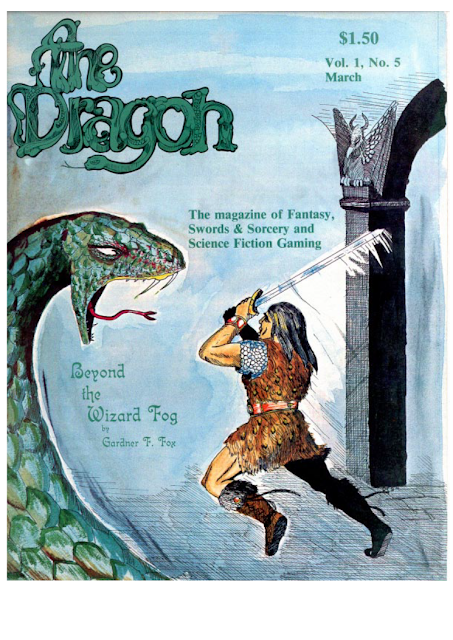 When I started this series of posts, I optimistically thought I would be doing something on the order of 5 posts a week on The Dragon.  Reality, I think, will put it at 3 a week or so.  So be it.  Focusing on the D&D stuff contained within.   Now, on to The Dragon Issue #5.

First things first - this is a cool cover.  More like fan art than professional, but very Swords & Sorcery-ish.  No hippy dragon either.

Lets see, what do we start with?  A seven page article / thesis on Witches in D&D titled:  Witchcraft Supplement for D&D.  Unknown author as apparently he (we know from previous issues women don't play D&D) failed to attach his name to his submission.  Like many of the early D&D articles, they don't follow a standard format.  What?  You say you want an example?  Okay:

WITCH MAGIC
Witchcraft, including those spells which resemble Clerical or wizard spells,
will not effect Djinn, Efreet, or Clerics of any alignment. These 3 character types
are immune to witchcraft.
All witches (except for a Priestess) have saving throws equal to warlocks.
For your saving throws against witchcraft, treat all witch magic as a “spell” on
the Saving Throw Matrix.
A good witch may normally perform 7 spells per day from the following
table. There is, however, a 4% chance that any good (Lawful) witch encountered
is ancient, thereby qualifying her as a Priestess. A Priestess may use the ten ordinary
spells daily, and once each week may employ one of her own, more powerful
spells. (Be sure to check every good witch encountered for category.)
Yep, I think I'll pass too.

Featured Creature - The Anhkheng:  I don't know who named the silly thing, but the art is by Erol Otis, and it still resonates 35 years later.  Amazing stuff.  Oh, there's some stats and a paragraph of fluff.  Sorry, I'm still looking at the art. 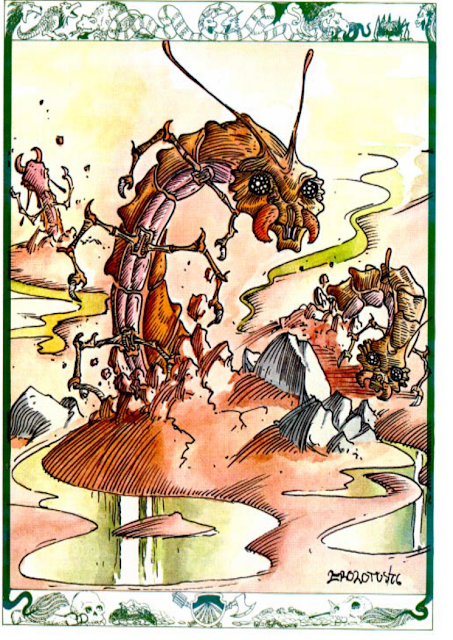 Yes, the abundance of fiction is still annoying me.

Wizard Research Rules - it includes a nice random magic weapon table.  Look at that - True Ring Making - I think I'll make one for my Hobbit... I mean my "Halfling".

Which of course leads us to the famous article - Gandalf Was Only a Fifth Level Magic-User.  I've seen this discussed on the 'net since I first found out about the 'net.  Interesting read.

Damn it!  Thrity-two pages isn't so long when u take out the ads and fiction and non-D&D stuff...