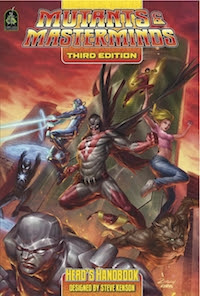 Mutants & Masterminds is the big brother of the OGL / D20 era of superhero games, and it has to be the most popular of the bunch.  The Mutants & Masterminds Hero's Handbook is the 3rd Edition of M&M.  Somewhere in the recesses of my closet there resides a hardcover copy of M&M 1e.

It appears to me that the work on DC Adventures had a lot to do with the evolution of Mutants & Masterminds, which is to be expected, as DCA was built upon the bones of M&M 2e.  Which means I really should read the 2 books side by side and make comparisons and notes and highlights - ain't happening.  The new M&M is over 230 pages and DCU is 280 pages.  I can tell you that the abilities and the stat scores match up, so they should be fairly compatible, but going thru all with a fine tooth comb is a chore for a hard core supers guy.  I'm just here for the game.

The art is top notch and the layout is eye pleasing, which is par for the course with Green Ronin.

I see this latest edition as a move toward using more of GR's True20 system, which isn't bad at all.  It's a nice spin off from the OGL that never seemed to have gotten the attention it deserved.  Hey, maybe we'll get a Swords & Sorcery sourcebook for the new Mutants & Masterminds.  Hey, one can hope ;)

I'm not sure you would need a copy of the new M&M if you already have a copy of DCU, but you should want a copy.  It's damn purty.

The Mutants & Masterminds Hero's Handbook is the core rulebook of the game's third edition and it gives you everything you need to have your own superheroic adventures. The detailed character creation system lets you create the hero you want to play, choosing from a wide range of skills, advantages, and power effects. Customize your hero's powers with modifiers to create an almost endless range of superhuman abilities. Choose the complications your hero must overcome, earning you the hero points to achieve victory. You can also choose from one of more than a dozen heroic archetypes, customize as you like, and be ready to play in just minutes!

The streamlined system of game play requires only a single die roll and features easy to use rules. Play out an entire heroic adventure in a few short hours without long, drawn-out encounters. Plus the hero point system allows players to influence the flow of the story and pull off superheroic stunts in the best comic book tradition! Become a hero of legend with the Mutants & Masterminds Hero's Handbook!