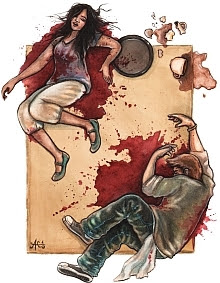 This wasn't the post I initially planned on making tonight.  I actually intended to highlight a recently released Quickstart, but this is cooler.

Evil Hat has just released a free one-shot adventure for their FATE based Dresden Files RPG.  Twenty-five high quality pages for the cost of your bandwidth.  Not a bad deal at all.

Admittedly, the adventure is pretty short, as 14 of those 25 pages are used for the 7 partially pre-generated character sheets, 1 page for the cover and 1 for the OGL.  Still, it should give a group a nice session or two of gaming, and the partial pre-gens are a nice way to help players that may be stumped with their character concept.  Can't beat the price either ;)

Neutral Grounds: Come for the hot, fresh coffee. Stay for the cold-blooded murder.

Two dead barristas ... a missing proprietor ... ghoul attacks ... poser vampires ... boy trouble. And it's your case, whether you like it or not.

Better make that a double espresso.

The Neutral Grounds casefile is a one-shot mystery-adventure for the Dresden Files Role-Playing Game, intended for 3-7 characters at the "Up To Your Waist" power level. Customizable, pregenerated characters with sheets and power details are provided.