Kobold Magazine from Wolfgang Baur is probably the best, all around, regularly produced gaming products around.  You can't go wrong with picking up an issue no matter what version of D&D or it's clones that you play. 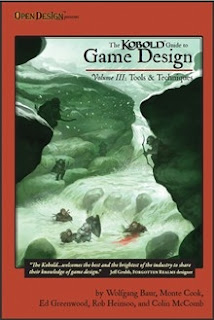 Wolfgang also puts out a series of GM/DM advice books.  If you want to improve your game, there is something in one of these volumes that will help you.  The latest in the series is The Kobold Guide to Game Design, Volume III, Tools and Techniques.

First things first:  This product is extensively hyperlinked.  After flipping thru TKGTPD3 (phew) for a few minutes via the hyperlinks, you'll wonder why most gaming PDFs don't follow suit.  It really adds to the experience.

In my opinion, the article most useful to DMs of OSR styled game is the one dealing with sandbox style games. Titled -  Buckets in the Sandbox: Non-Linear and Event-Driven Design by Wolfgang Baur, it shows how a sandbox setting can have both order and freedom.  I've always though of a sandbox campaign as barely ordered chaos.  Now I have other options.  Well written and thought out, it's given me some ideas to think about as I plan for my next game.

All of the articles deal with different angles of adventure design and / or game design.  Want to get a head start on designing your own combat system?  Colin McComb has some thoughts.  Need to work on your plot?  Ed Greenwood has you covered.  The list goes on... its a whose who of game designers.

As for me, I think I'll be stealing... borrowing the most... from Wolfgang's sandbox.  Repeatedly.