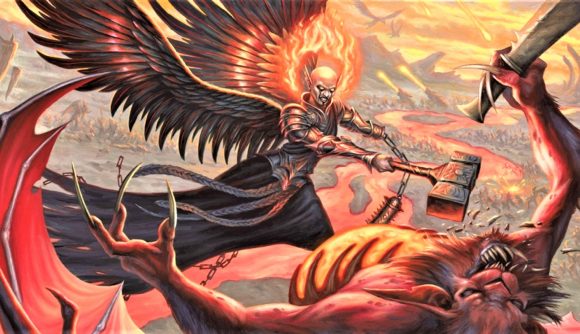 Bad Mike and I touched on this story earlier tonight on the Talking Crit Livestream, but I thought it was worthy of sharing on the blog:

D&D lead rules designer: Devils don’t have to be evil any more

While the title may be a bit extreme and expands upon a topic that has already been touched upon (orcs and drow no longer necessarily being evil) Jeremy Crawford takes it to the next level:

Almost all other creatures will either be listed as “Any Alignment” or, in a few cases, “Unaligned” – and even creatures with a “strong moral inclination” such as Angels, Devils, and Demons, will merely be listed as “Typically” Good or Evil, to be customised at the DM’s discretion. It’s aimed at underlining the idea that alignment – which plots a creature’s position on the twin spectrums of Good to Evil, and Lawful to Chaotic – is meant as a “narrative suggestion” and “roleplaying aid” rather than a fundamental, cast-iron rule.

I don't remember alignment being a cast-iron rule. I always thought it was meant as a guideline and a narrative shortcut.

"It's a raiding party of orcs" - evil

"It's a hunting party of elves" - good

Individuals were always potentially exceptional. That is the narrative power behind characters like Drizzt - he is exceptional. If all Drow could be good heroes, he'd no longer be special.

Devils are just misunderstood in D&D 5e. I knew it all along...