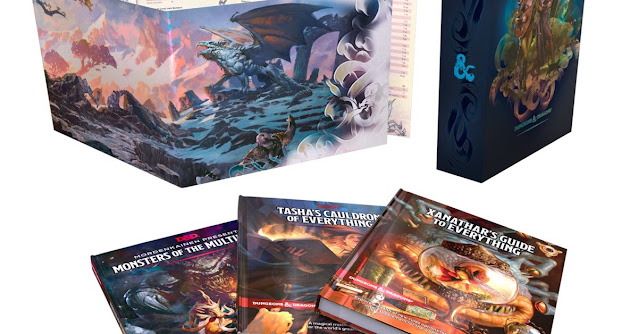 Now, I know a certain percentage of The Tavern's regular readers are saying "who gives a fuck that WotC releases are being delayed!" and I certainly understand that sentiment. It's not the fact that the books are delayed, it's WHY they are delayed that is the actual story. It appears the Expansion Rules Gift Set will miss the Holiday sales season (among other titles being delayed)

Wizards of the Coast previously announced that its upcoming Expansion Rules Gift Set box would be released in January 2022 instead of its originally intended holiday 2021 release date.

Many industries have experienced delays and disruptions caused by a global shipping crisis and widespread resources shortages. The book industry has been particularly hard hit in part because of printer capacity issues compounding the supply chain problems caused by the pandemic. Several experts have noted that larger books - such as gift books, box sets, art books, and coffee table books - are being particularly impacted by the current wave of shortages.

Add in the labor shortage in the US, impacting everything from unloading cargo ships, warehousing, and shipping within the States and you have a perfect storm.

I wonder if this makes using a US printer more viable, at least for some of the smaller publishers, as shipping from China (where WotC, Paizo, and other TTRPG publishers print the bulk of their books) is becoming more of a crapshoot.