Kickstarter - Tales From the Sorcerer Under the Mountain (OSR / 5e) 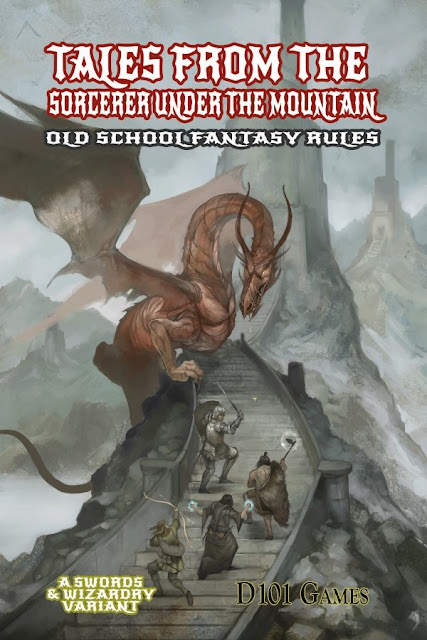 A few quick notes: I really enjoy everything Newt / D101 Games has put out. Be it Crypts & Things (his S&W Swords & Sorcery hack), Openquest and all of the related adventures. Simply immensely playable. Newt's Kickstarters are pretty much on point each time and his track record is quite good.

Which should make it obvious that I'm backing the Tales From the Sorcerer Under the Mountain Kickstarter ;) Seriously, I can't get my fill of Swords & Wizardry hacks, and Newt has done it well in the past.

There are two books you can back in this Kickstarter:


Tales from the Sorcerer Under the Mountain, an A5 hardback OSR rule book, which as well as a concise version of the Swords & Wizardry rules, with a chapter which holds the House Rules I use in my games, and contains the adventure with OSR stats. Overall it weighs in about 230 pages, with black and white art throughout, cover by Jon Hodgson.


The Sorcerer Under the Mountain, 5th Edition Adventure module in 8″ by 11″ format, black and white art throughout.

The 5e adventure is $10 for the Print plus PDF. Shipping extra.

The OSR book in at cost POD plus PDF is 12.27 (as of right now ;)  Obviously, you pay for the cost of the printing and shipping after the Kickstarter funds.
Posted by Tenkar at 10:50 AM