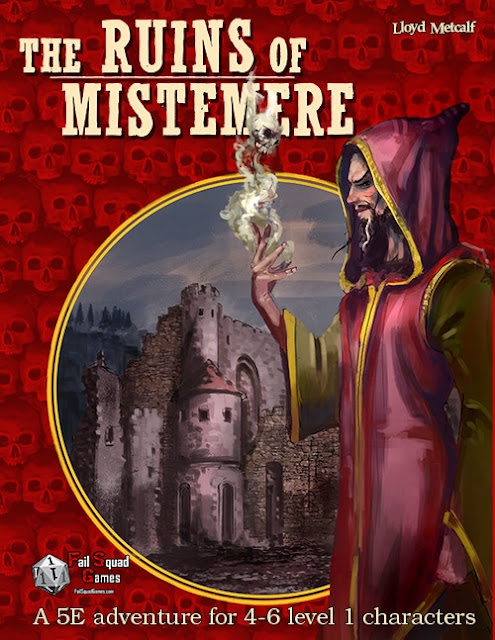 Fail Squad Games has an excellent Kickstarter record. Strong adventures, excellent art, and Lloyd is one of the few that knows how to handle solid physical add ons to his projects.

So, what is The Ruins of Mistemere?


This adventure is inspired by, and is a revisit of, the first “Group Adventure” in a certain Red Box set of the world’s favorite basic roleplaying game. The original version of this adventure was likely the very first quest many players embarked upon in the days of 1983. It was also likely the first adventure run by many budding GMs at the same time.

This adventure is written to be fully compatible with the 5E ruleset and written in such a way as to keep the author(s) from goblin jail time at the hands of certain wizards who live near a popular coast.

Some names seem to have changed as planes of existence were traversed. Borgle is well known in many original adventures and legends; many report that his name was spelled with an “a” in place of the “o”. It is also told in ancient tales from different cultures that the spellings of Mistemere and Alena can be slightly altered from the records of the coastal wizards.

I spoke with Lloyd at TotalCon last week. He was very excited about The Ruins of Mistemere. Lloyd feels it converts easily to the various OSR rulesets and I don't doubt him.


About The Ruins of Mistemere

The Ruins of Mistemere is written as an introductory adventure for a group of 3-5 5E players of levels 1-2. The ideal match for the adventure is 4 players at level 1.

While the beginning of the adventure relies heavily on the original story and layout of the "First Group Adventure" it has been changed significantly after the initial first few encounters. What follows is the Fail Squad Games' version of how the adventure progresses in our world (Artera).

Over-all this is a short page count adventure (20-24 pages), but can carry a group for four sessions and into level 2 or 3 before completion.

We've gone above and beyond to improve playability and tested this adventure at a number of conventions and tables before releasing our final version.

Full-color Print or B&W Print plus PDF are each 16 bucks. Not a bad deal at all.