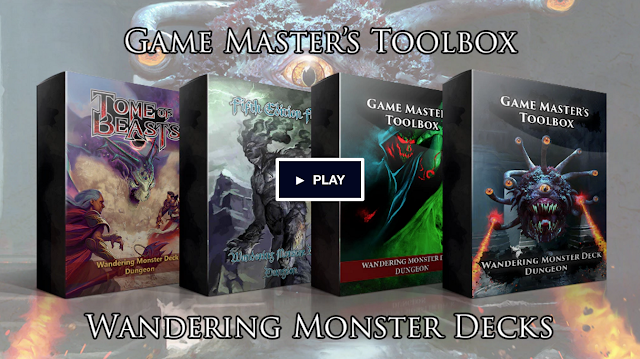 Wandering Monster Decks for 5E and Pathfinder is a Kickstarter by Nord Games. I've enjoyed backing their previous KSs as they seem to have a nice handle on GM accessories regardless of system used.

What I find interesting with this offering is that they have licensed content from both Frog God Games and Kobold Press in addition to using the core creatures for both Pathfinder and 5e.

Now, I know the question on the minds of many: Why am I even looking at this if it doesn't directly support Swords & Wizardry, OSRIC or some other OSR system? Because looking at the card backs, they appear fairly systemless. So long as you have access to a monster book of sorts appropriate for the deck you are using for your system, it looks like you are good to go. Obviously, Tome of Beasts and Fifth Edition Foes require a specific reference book.

Still, I'd love a deck of cards that refers to Swords & Wizardry Monstrosities... hint... hint ;)