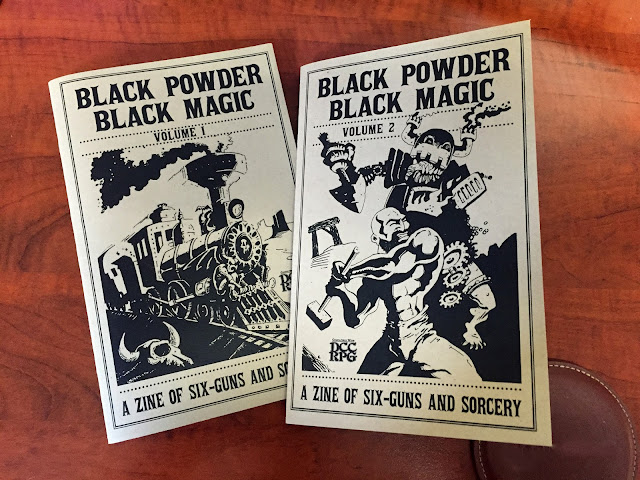 See? I told you there were some guest posts in the hopper ;)

If anything marks the tide change in the growing mainstream popularity of Dungeon Crawl Classics RPG, it’s the presence of a plethora of Third Party Publishing support like Black Powder, Black Magic Vols. 1 and 2.

Ostensibly presented as another member of the legion of DCC RPG fanzines (over six separate publications at last count), Black Powder, Black Magic is in fact a new game setting for DCC RPG, one billed as mixing “six guns & sorcery,” which really would have been just as apt choice of a name for the system.

But BPBM’s “six guns & sorcery” approach is also a well chosen call-back to gaming in the halcyon era of the 1970s, a period which DCC RPG itself is designed to emulate in playstyle and feel. Those of us who go back to those days well remember playing our first Boot Hill games. The typical player strategy of the day was to slowly badger the GM by turning Boot Hill into a D&D type game by any means necessary. “No Fireball spell? No problem. We’ve got a case of dynamite and shotguns” was our mantra back then.  Thus, a setting like Black Powder, Black Magic gives old school style players exactly what they want. In a much more straight forward approach than past games and settings (Deadlands, I’m looking at you), BPBM presents the wild, wild west of the mid-to-late 19th century as an alternative history in which a substance called “demon ore” has been discovered and exploited, the U.S. government has all but forbidden travel to the “Dark Territories,” and a boom town like Brimstone is the perfect place for a player character to make a name for himself or die trying.

The first two volumes of BPBM couldn’t be better presented for players and judges to get started. Vol. 1 presents the basic campaign setting, rules for generating level-0 characters including occupations, starting equipment and trade goods, a common names table, and even the clever “Token of the Past” and “Motivations for Heading West” tables to help players easily slide into the setting. Rules for firearm use are of course covered (and could be handily adapted for use in a modern era DCC RPG setting). All of this is followed by the moody and intriguing level-0 character funnel adventure “The Devil’s Cauldron.”

The recently released Vol. 2 only ups the ante, by presenting all the rules necessary to convert the classic DCC RPG classes to the new setting. Want to run a fighter, wizard, cleric, or thief in the Dark Territories? The conversion rules are here. The rules for the cleric class are especially nice, with options for running everything from a Protestant Preacher or Native Shaman to a Chinese Mystic or a Cultist of the Old Gods.  Notably, two new setting-original classes are given: the Gambler and the Prospector (notable for actually being able to sense and find the vital demon ore). More BPBM classes are sure to follow in Vol. 3.  Vol. 2. also contains my single favorite item from the first two volumes — a full Patron writeup for BPBM: John Henry, the Steel Drivin’ Patron. Everything you need is there, from John Henry’s Invoke Patron results to his Patron Taint, Spellburn effects, and new spells. The second book then ends with some new monsters for BPBM with the promise of more to come in subsequent volumes.

So while Carl  Bussler and Eric Hoffman’s Black Powder, Black Magic bills itself as a DCC RPG fanzine, it’s really much more like the Little Brown Books of original D&D, albeit with considerably better organized rules, better typesetting, and excellent art by Todd McGowan. A sure sign of the warm reception these booklets have received is that as of this writing, the first print run of Vol. 2 has sold out. Fortunately, Vol. 1 is currently still available and a new print run of Vol. 2 is in the works. So what are you waiting for? Saddle up and ride hellbent for leather to Stormlords Publishing and go get yourself the DCC RPG setting that will make your players want to always have the sun at their backs, because a PC always needs an advantage.