Business is Bad Because of "Tournament of Rapists" Backlash 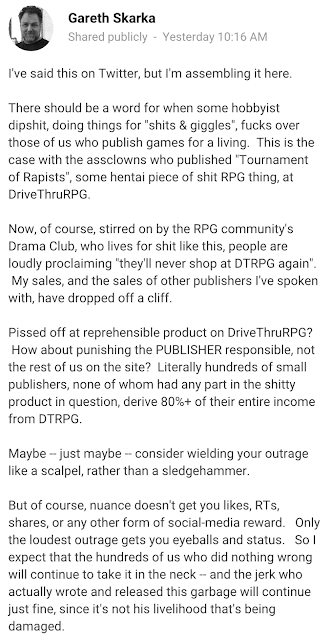 - Tournament of Rapists went up at the end of last week and the social media backlash was mostly over the weekend.

- Yes, some small publishers pulled their products from OBS

- Yes, some customers declared they were no longer going to shop at OBS - I saw one go so far as saying he was deleting his account (backups gone - ah well)

- I suspect the small dip in sales (or the small cliff they went off of) is barely noticeable (if it IS noticeable) and all will be back to normal in a week or two.

- In the case of Gareth, I would expect the backlash would have been over Far West, the never shipped pre Far West Buckaroo Bonzai game and his never ending series of excuses

Edit: There isn't enough time to link a drop in sales to Tor at this point. Someone is crying about the wrong wolf.
Posted by Tenkar at 12:09 PM