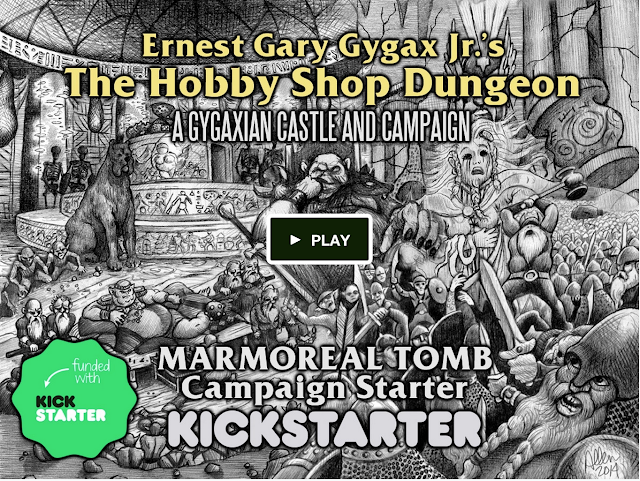 I've been so distracted by negative events with certain Kickstarter projects (Ken Whitman can take numerous bows and curtain calls for this) that I've managed to miss some recent well respected Kickstarter releases.

Ernest Gary Gygax Jr.'s Marmoreal Tomb Campaign Starter is a huge megadungeon and setting. What exactly is it tho? Is it old? New? Does it harken back to the days of the hobby's beginning?


THE HOBBY SHOP DUNGEON is an adventure game setting originally created by Ernest Gary Gygax Jr. in 1978 while working as a clerk for the fondly-remembered Dungeon Hobby Shop of Lake Geneva, WI. Inspired by the many games and campaigns he played with his father and many friends, and aided by incomplete maps initially drawn by Terry Kuntz, Ernest came up with a large sprawling dungeon complex that could be used to run games at the store. Since then, more than a thousand players have explored its depths, as remembered by Ernest, including TSR alumni, family members, customers and gamer friends, up to 22 players per sitting! It has been played in a variety of venues including Margaret Weis’s and Don Perrin’s Game Guild, in California’s Dungeons & Dragons Entertainment division, as a special event for game conventions and many more besides.

This is the entire dungeon and setting around it that GP Adventures wants to bring to publication via its Hobby Shop Dungeon game line, starting now with the Marmoreal Tomb Campaign Starter.

It does have history, which is exciting. What's even more exciting to me is that +Benoist Poiré has been drawing the maps. I love Benoist's style of mapping.

The project is already funded ($29k with a goal of $20k) and has nearly a month left to run. I expect a ton of stretch goals will be hit. Thus far, some have been add ons and some have added to the base reward goal.

The most recently achieved stretch goal is the add on Sci Fi Conversion, to be written by none other than +James Spahn of White Star fame:


We just zoomed past our $27,500 stretch goal, and that means James Spahn will help us flesh out the optional Science-fiction/Science-fantasy customization document we have now added to our list of Add-ons to this Kickstarter project.

If you would like a copy, add $5 to your pledge, and you will get a digital (PDF) document detailing how to use the Marmoreal Tomb and its Expansions in a sci-fi campaign, along with a sample adaptation described using the White Star: White Box Science Fiction Roleplaying game.

Next up are Pathfinder and 5e conversion documents.

I'm in. Probably at some ungodly amount. Need Wilderness and Underworld expansions. Player's Guides would be cool too. Damn it!
Posted by Tenkar at 10:31 AM