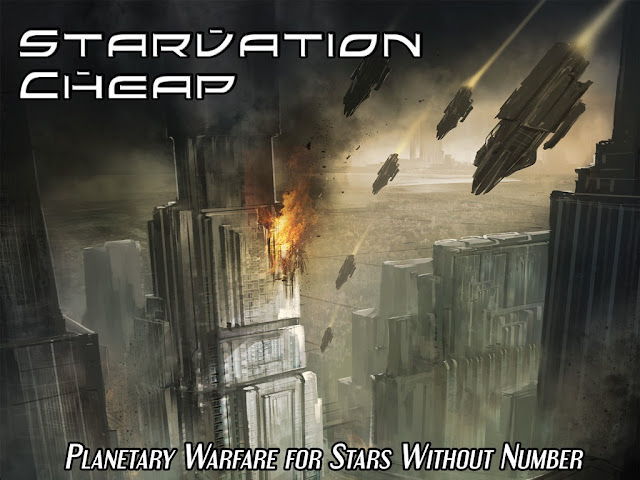 I'll start with the "due diligence." +Kevin Crawford always comes in early. Kevin always has the text ready to go before the Kickstarter downloads. One of the stretch goals has the art used available for free for personal and commercial purposes. Did I mention Kevin Crawford is running the Starvation Cheap: Planetary Warfare for Stars Without Number Kickstarter?

It's simply a ground ball.

Heck, it could easily be used for other OSR style sci-fi RPG, like White Star, X-plorers and others.


Starvation Cheap is a military campaign supplement for the free Stars Without Number sci-fi tabletop role-playing game. It's written to provide the reader with all the tools they need for building a sandbox-style military campaign focused on planetary armies and mercenary legions. Everything from the construction of wars and vital military objectives down to the gritty details of building a battlefield adventure is provided in this 100+ page book.

While written for Stars Without Number, the great majority of the tools in this book are system-neutral, perfectly usable with the sci-fi game of your choice. Within these pages you'll find tools like...

Details on the typical structure of a modern ground army. Ranks and roles are described, along with the pertinent details of military justice, the chain of command, and the various types of modern military units. GMs unfamiliar with military culture and flavor can use these pages to tighten up their game.

Guides for creating planetary conflicts through War Tags, rolling up reasons for savage conflicts and assigning critical Vital Points that must be captured or overcome if a side is to be victorious.

Building ground armies, dividing them into units, and dealing with the potential complications of sending modern laser rifles and gravtanks against spears and lostworlder jezails. Creating a mercenary legion? Everything you need is in here, too.

Strategic mass combat rules for resolving these planetary wars with the armies and mercenary legions you've made. The rules are quick and streamlined, meant to give a fast outcome and focus on player involvement in offensive priorities and desperate defenses.

GM tools for building battlefield missions and adventures, with the PCs thrown onto the field to achieve some grave task or die trying. These rules interface with the mass combat tools, making PC success in their objectives the crucial factor that tips a bitter defeat into a hard-won victory.

Hardware, of course. Lots of merciless hardware, from self-propelled artillery guns to radioactive weaponry and semi-sentient landmines. The far future battlefield is a dangerous place to be.