I know I have my own blog where I can post crap, but Tenkar’s Tavern has a bit of a history with Kicksnarking, and frankly a larger audience to share important details. Sharing a brief update here is, at a minimum, a public service announcement.

Before I get too far ahead of myself, this “update” is regarding the Knights of the Dinner Table: Live Action Series (KoDT: LAS) Kickstarter…..well, no it isn’t. This is about Ken Whitman, serial Kickstarter and all-around leech to multiple RPG fandoms. Please assume that any colorful descriptions or metaphors regarding Mr. Whitman are not only willfully derogatory, but clearly biased. I would love it if you blatantly assume I’m against Mr. Whitman and that everything I state is an outright lie……I know Ken is! Look at my previous post here at The Tavern, follow some of the links, and make your own decisions. A HUGE part of the problem is too many people have known about Ken Whitman’s fuckery and NOT spoken out about it.

Ken Whitman is behind 7 “current” Kickstarters that have raised over $171,000. This week, in a matter of days, three of these Kickstarters are to have big “premieres” at GenCon. The creative cycle so far on these projects seems to have been a detailed eight-step process:

I am certain there is another step or three in there about spending the money on personal stuff, but for me to state that clearly would be an absolute lie…….but if you assume I’m already lying (Paging Ken Whitman…you know he has a Google Alert set up) does that mean this is the truth?

Now I only have experience with the KoDT:LAS, but an often overlooked aspect is that there are two other “movie premieres” schedule for next Thursday. With the KoDT: LAS Ken has had an frustratingly stalwart ally of Jolly Blackburn. Jolly has been spending a good portion of the last year running interference for Mr. Whitman, trying to keep the fans (and backers) informed, and generally putting a positive spin on everything. I know 1st hand that this project…..Ken’s project…is important to Jolly. This is the 25th Anniversary of the Knights of the Dinner Table and even though this Kickstartered project is a KenzerCo license (i.e. Not something being done by KenzerCo). Jolly is emotionally invested in the outcome of the movie, not just because the Knights are his “baby”, but because so many of his friends and family have directly invested in seeing the KoDT:LAS movie.
You could easily head over to the Kickstarter comments to read the history yourself, but the summation is the eight-step process I outlined above. Promises were made to send out premiere tickets to those who paid for them. Promises were also made to be more communicative with the backers. Instead Mr. Whitman decides to spend his time working out, posting Facebook memes, and anything else but work on these movies. As the date gets closer Jolly keep reaching out for details and there is nothing but silence……

…..until Ken decides that Jolly is…..a liability. Evidently wanting backers to get their tickets and their reserved seats is too much a strain on Ken. Expecting to see the episodes to give creative feedback isn’t appropriate. Way out of line is hoping to receive the money and names/details of those who bought KenzerCo products through the Kickstarter campaign. I know that behind the scenes (don’t believe me, I’m full of it…remember) Ken has already blamed Barbara Blackburn for the delay of product and Jolly for his “inability to raise money online”.

Overtly Ken has shut the Blackburns out of the KoDT:LAS Facebook group, which has since been deleted(?). This was after Ken stole a paragraph of text off of Urban Dictionary
and posted it on his wall. 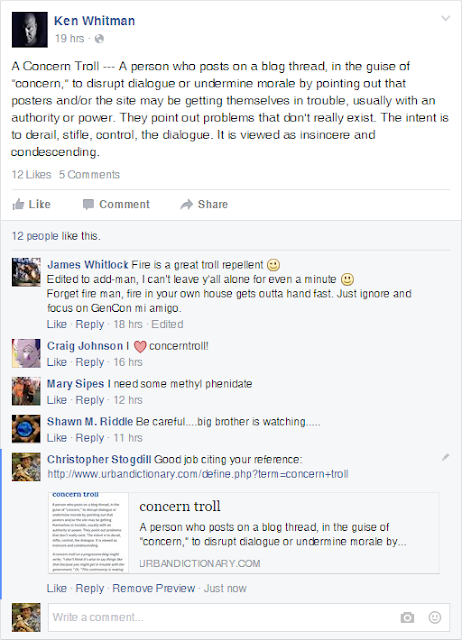 Was Ken referring to Jolly……his actions would lead me to “yes”. A hilarious….well, I found it hilarious, older meme was generated that works better than any I’ve seen in that same vein.

I don’t know what Ken Whitman is thinking, but before you start throwing stones at one of the kindest, most respected people in the industry (one of the 51 people in the GAMA Hall of Fame ) you might want to make sure you got your shit together….please ask someone else, because it is apparent you think you do have it all together.

Ken Whitman should never be allowed to make another dime in the RPG industry again.

addendum - +Christopher Stogdill sent me this just a bit ago:

This morning's hasty video announcement and accompanying post where Ken claims to be involved with the scramble to fill the void he left when he cancelled the after-party is just a whitewash. I don't assume everyone, much less anyone, will go through all of the comments on all of the Kickstarters, much less the other bits and bobs floating around the internet, but this is part of Ken's pattern. Silence and blame followed up by more promises. I'd posture that only the reason he did a video is because his brand of persuasion check has to be face-to-face to gain any significant modifier to the encounter and this is the best he can do to get the best bonus possible.

This is just the same MO......nothing has changed except now he's willing to not only continue his lies, but take credit for other people's work. He knows that this close to GenCon people are busy going to GenCon and if he can slip this in there those that are out driving and flying don't have enough time to properly countermand his bullshit. All he needs to do is try and sow enough confusion and deceit to take some of the heat off. He probably thinks if he can take credit that he won't be on the hook (in a real legal and financial sense) for taking people's money for the Premier and After-Party.

Nope...this is all just part of the same cycle he's been riding since day 1.

edit - Ken also implies that he is working with Jolly on getting the afterparty organized - the same party he canceled with the same actors he couldn't afford to fly out: