Kickstarter - Ken Whitman Redefines Failure Yet Again - Knights of the Dinner Table: Live Action Series (You Know All that Shit he Promised the $450 Backers? Fuck Em!) 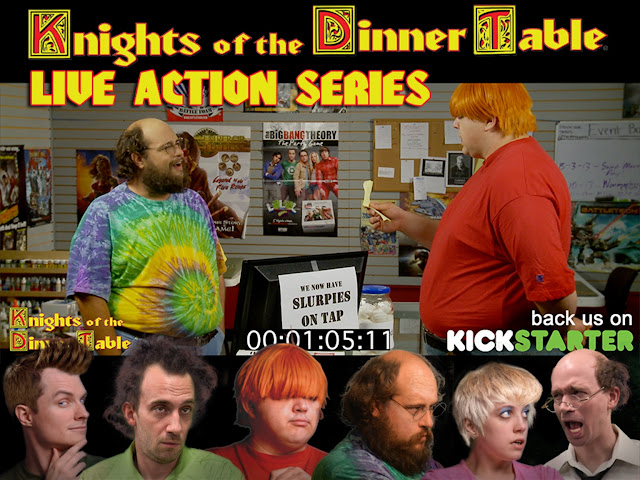 Holy shit, this is one hell of a train wreck.

I give Nystul credit for admitting where and when he fucked up. Ken? Douchbaggery and then some.

(From Josh who plays the role of Brian in KODTLAS. Ken was supposed to fly Josh to GenCon to be at the premiere but broke that promise.)

Ken: J.Hey Josh, yeah. I could not raise the money. Jolly has pretty much fucked me from making money. It's a total fuckery. Anyway, I'm sorry, I thought I could pull out of this one and make it happen. Sorry brother (Notice how Ken tries to scumbag Jolly?

This was my response....

Josh: I have to disagree man. I don't see how Jolly made you squander that money and screw us all out of this project. I really hope that if future episodes get made, we don't get recast because of our association to the fuckery that was last summer's shoot. I really hope you can get those 3 episodes to him. The fans and backers that have put so much into this project deserve it. There's two ways out of this mess. You man up and give what you've got to the fans so that Jolly and Barb aren't left holding the bag and save some face or you tuck tail and run. I would highly advise against the latter. The people who believed in you and supported you are owed more respect than ignored messages. The fans deserve the first three episodes and the actors who want nothing more than to bring this project to life, deserve the first three episodes. I'm really hurt at the way you're treating them. It's not right man. I know you have your own side to the story, but you have to get it together. You made a promise. Stick to it. I'm not talking about flying me up. I'm talking about the episodes. Release them for Gen Con. You had a gift the fans gave you and you wasted it on looking good or making big promises. Real art isn't about that man. Film making is not about that. It's about the work. It's about creating something and not getting caught up in the money. They didn't give you that money to buy a chrysler 300 M so you could look like a producer. They gave you that money so you could create something. It's the only right thing to do. We deserve better!

Nice little inside peek at the mind of the man who admitted that he does serial Kickstarters because he squanders the money from the previous ones.

But wait! Theres more! Buy now and you can watch how Jolly and Barbara get booted from the Facebook page of the KotDT Live Action Series for advocating for the backers of this very Kickstarter:


Jolly - Well I tried folks. Ken is not talking about the premiere at all. No invitations to the premiere have been sent out. None of the actors to my knowledge are going to be at the premiere (no fault of their own - mostly due to failure on d20 Ent's part to make proper arrangements). Ep2 and Ep3 were in very rough shape last time I saw them. No idea what's going on since Ken refuses to even give me answers. And for asking publicly his response booting me from the group and deleting my questions and those of other backers. Guess we're all going to show up at GenCon and be surprised.

But hey. At least the backers at $450 are going to get front row seats to the Premiere, time with the actors, a Q&A and an after party, right?


Jolly - So Ken just posted this apparently;
"All three episodes of KODT will be premiered at Gen Con in various states. They are not done, and a work in progress. (this shit was supposedly done earlier this month I thought)
We are working on having them done, and ready for download in August.
We will then produce and ship the DVDs as soon as we can.
For those of you with Premiere tickets, there will be a second line at the show for you. You will be seated first.
There will be no actors at the show and therefore no Q&A, and there will be no afterparty. Sorry for the problems."
'various states"...?
No after party?
NO Q&A.
Ken you are a coward. Face the backers and answer their questions at least face to face at the premiere.

But wait. Ken still hasn't emailed those Premiere tickets, has he?

Now, I'm not calling Ken Whitman a crook. He gets upset when folks label him.

Instead, I'm going to give y'all a textbook definition of a crook.

Crook - a dishonest person, especially a sharper, swindler, or thief.