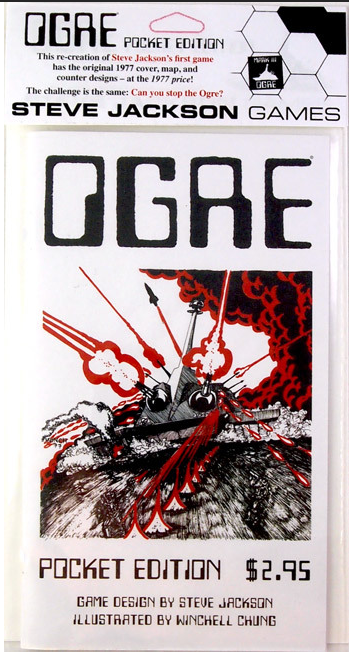 Steve Jackson Games is offering the OGRE Pocket Edition for a measly $2.95. You can order direct from them (and pay some sort of shipping, so you might want to pad that order) or pick it up at your local game store by the end of the month.

I played the shit out of OGRE and GEV back in my high school and early college days and you really can't beat the price.

The giant tank rumbles toward its target . . . its guns are destroyed, its movement crippled, but only a few defenders are left. Will they stop the robot juggernaut, or will it crush the Command Post beneath its gigantic treads?

In 2012, Steve Jackson Games launched the "Designer's Edition" of Ogre on Kickstarter. . . a 24-pound box with giant maps and several hundred counters, retailing for $100.

Now Ogre Pocket Edition takes the game back to its roots. A small rulebook, 140 counters, and the same bare-bones map Steve drew himself for the very first printing. And the price is the same as it was in 1977: $2.95. ($2.95 in 1977 dollars translates to be over $10 today when adjusted for inflation; this is Steve's way of saying 'thank you' for your support for Ogre over the last three decades.)

Despite its "pocket" size, Ogre Pocket Edition will have more than enough counters to play all five of the "Ogre vs. Command Post" scenarios. It includes two different conventional forces (a Black force and a White force), with a whopping eight White Howitzers! That's a whole lot of gameplay for $2.95.

Email ThisBlogThis!Share to TwitterShare to FacebookShare to Pinterest
Labels: OGRE