Another Nystulian Sighting - This Time, an Axes & Anvils Update 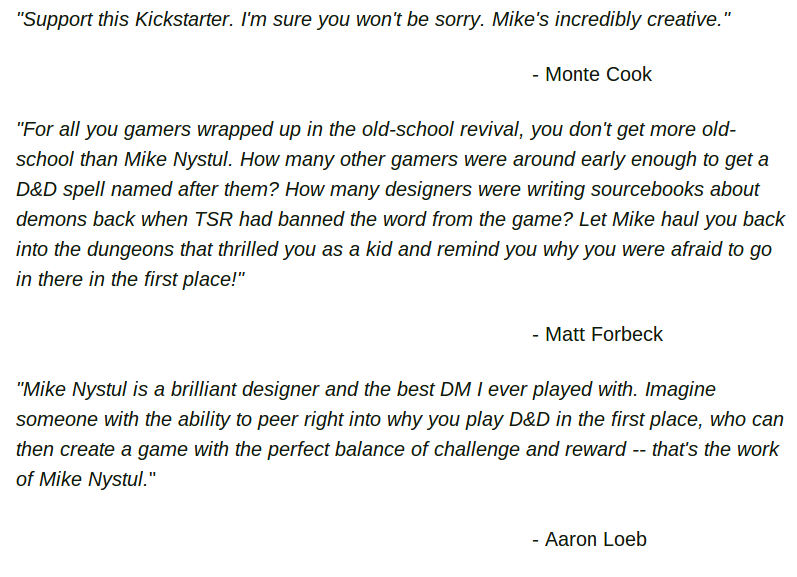 It seems when Mike get's a spark, it spreads. What confuses me is, A&A was effectively completed, in PDF at least. +Andrew Shields was brought on by Mikey to do so. It was released to backers, then deemed "not worthy" by Mikey, apparently because it lost much of it's Nystulian identity.  The thing is, the torch for Nysul's Infinite Dungeon was passed on to "some other sucker of a company (I forget who right at the moment.) So, why is Mikey messing with something he already washed his hand of, unless it's just to obscure things with new "I'm working on it updates" when in reality, all he is doing is a casting a cheap, 1st level spell.

I am tackling my outstanding Kickstarters methodically so that i can get everything done. The first steps involve figuring out exactly what needs to get done and how to do it. Then I will set about working my way down the list until everything is done. I will also be going in the order the Kickstarters were presented so "Nystul's Infinite Dungeon" is first. I will be generating some material for each of the Kickstarters that will be shared with backers of all three. When I know what you will be getting from the Infinite Dungeon project. I will let you know. At the very least PDFs of some maps and an RPG called "Delve".

I'll keep you all posted on my progress.

Thanks as always for your patience and understanding.