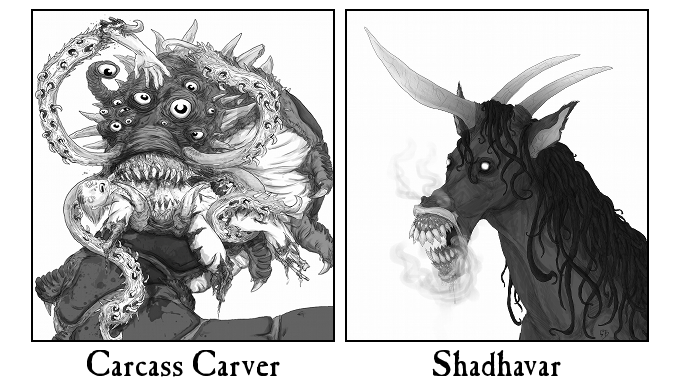 There aren't many Kickstarters I'd be willing to go into just based on the name of the creator alone, especially when it is their first Kickstarter. +Rafael Chandler is a proven OSR commodity. Well, if not commodity, then a proven OSR creator of some amazingly kick-ass shit. It's not that I think the man is sane, I happen to think he's insane in an awesomely creative manner.

I happen to love the Teratic Tome (available as Pay What You Want, if you desire a peek at +Rafael Chandler 's work). It is, quite simply, the best old school bestiary I've seen come out of the OSR, and we've had some good ones. I'm willing to bet that Lusus Naturae will blow the Terratic Tome away.

In a mere 7 hrs Lucus Naturae has nearly reached half of it's funding goal of $6,660. Yes, +Rafael Chandler has some fucked up sense of humor. Who cares, as he does some amazing work ;)


Lusus Naturae ("Freaks of Nature") is a collection of grotesqueries that will break the bodies and hearts of your player characters. If you like horror in your old-school gaming, then you'll enjoy this bestiary.

It uses the Lamentations of the Flame Princess system. LotFP is a dark and violent tabletop role-playing game of horror/fantasy, and it's part of the "Old School Renaissance" family of games; download the free PDF here: http://goo.gl/bXn7vW

Each entry In Lusus Naturae is accompanied by a black-and-white illustration by Gennifer Bone. She's executing all the artwork, because I love her style, and because she gets where I'm coming from. I enjoy things that are broken, hideous, and upsetting; she's good at illustrating these notions. We're a great team.

The 100 viscera-chewing monsters in this book include:

Pain-fueled Algionauts, bestowing power upon those who mutilate themselves

The pitiless and insectile Blight, which hungers for the agony of tormented newlyweds

The self-birthing Porphyrogene, eternally seeking the origin of feminine power

Vitiators, which methodically disembowel those who ignore entreaties to abandon sobriety, virginity, and abstention of all kinds

The thin and lonesome Wending Skirl, howling its soul-deadening grief in frozen woods
Methodical and elegant Monstructs, which build their Citadel of Perpetuated Joys from the bodies of children