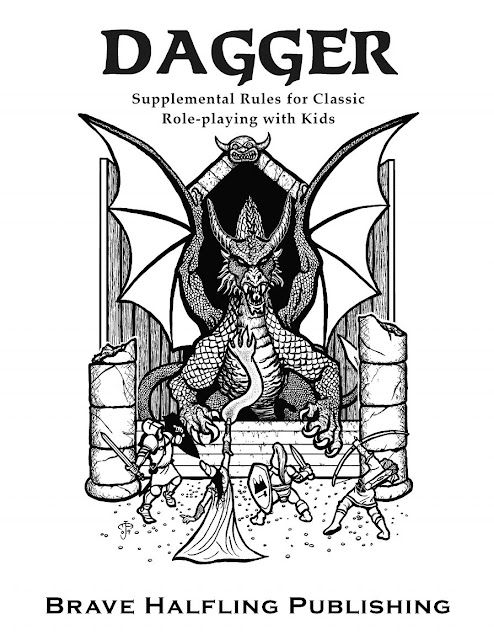 DAGGER is an OSR RPG that relies on the use of another OSR RPG (your choice really) to be fully used. At it's core, it's a series of instructions on how to simplify OSR gaming to bring children into the game - kids from 5 and up.

It's only 8 pages, and that includes the cover and the OGL, but it's simplicity is where it shines. So simple, I know of someone who is already working on hacking it into a drinking game for adults ;)

It's free, it works and it may just open up a new world of imagination to your kids (or with the future hack, adults too :)


DAGGER is a simple, fast and fantastic tool for classic, old-school role-play gaming with Kids!

DAGGER is designed to introduce kids 5 years and over to classic-style fantasy role-playing. It is compatible with most old-school fantasy role-playing game systems. It is played with one adult acting as the Referee and from 2 to 10 kids playing the parts of adventuring heroes.

This supplement uses  common, core mechanics found in most old-school fantasy role-playing games. However, these core mechanics are reduced to only the most basic elements necessary for play. This effectively simplifies the game so that players as young as 5 years can easily grasp the basic concepts. The rules presented here are supplementary (i.e. they are not all-encompassing) and it is assumed that the Referee already possesses a general knowledge of some form of classic fantasy role-playing. Any aspect of play not covered in these rules should be handled by the Referee, “filling in the gaps” as necessary with his own rulings, or rules from another classic fantasy system. This is a practice that is expected and encouraged.

Included in this Free Product (all are easily printed):