Castles & Crusades 50% Off Sale at RPGNow 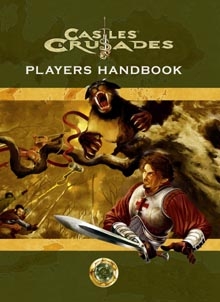 My return to active RPG Gaming was due in large part to Castles & Crusades. Heck, I played in a D&D campaign for the better part of two years via Fantasy Grounds 2. It was fun and certainly felt like D&D to me. In many ways, it was my introduction to the OSR before there even was an OSR movement.

I still buy much of the C&C stuff that is released, even if my current game of choice to run as a campaign is ACKS (and of course DCC RPG in shorter arcs). C&C Classic Monsters is the poor man's Tome of Horrors Complete if you ask me ;)

Not everything is on sale for 50% off (regretfully Classic Monsters isn't included) but the Player's Handbook is $6.99, Monsters & Treasures is $5.59 and even the Castle Keeper's Guide is marked down to $12.79.

Not sure how long th sale is for, so strike while the iron is hot ;)
Posted by Tenkar at 9:23 PM

Email ThisBlogThis!Share to TwitterShare to FacebookShare to Pinterest
Labels: Castles and Crusades