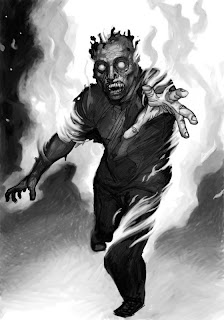 We're about a dozen sessions into the Adventurer Conqueror King or Die Campaign that I'm been running mostly weekly. The party consists of 4 PCs (covering each of the major food groups) of levels 3 to 4 with a 1st level henchman each. The recent addition of henchman has certainly added to the viability of the party, and allows the party's mage to actively participate when he isn't casting. So, it's a win - win.

The highlights from last night's session:

The party smashed to pieces a one armed goblin statue. That might come back to haunt them - I guess we'll find out in a session or two.

Later, they stumbled into a large ass crypt with 10 skeletons and 10 zombies. Multiple successful turning attempts kept the part from going under (although one of the henchman went down and lost a tooth). This was followed up by multiple tosses of flaming oil complete with splash effects on the retreated and cowering undead.  Most of the zombies made it back to the party to reengage but the damage was done, and the undead fell fairly quickly. Mark off fire for the session.

A short time later they surprised a small group of mongrelmen. After trapping them with a web spell, they were asked the usual basics - coins, magic, loot, where's it at? When no useful answer was forthcoming, they were quickly disposed of. Maybe a "?" for the torture part. ;)

Otherwise, the usual killing, looting, bad jokes and horrible stories. All the reasons you love to play RPGs and more.