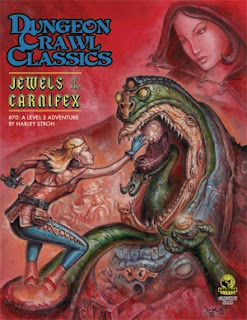 The background material for the Jewels of the Carnifex is awesome. There are seeds here to use in designing your own adventures if you are so inclined. Harley Stroh has done another fine job.

Something that struck me (but I'm sure I've seen it before in previous DCC RPG adventures from Goodman) is the rumors table. The roll is by player, not by PC - so there is an assumption here that players may be bringing more that one PC into the group. I know we often played with 2 PCs per player in my early AD&D days, as it was hard to fill a full group. I'm not sure if that is the intention here, but for the most part I've preferred 1 PC per player (plus henchmen). As a DM it's easier to follow who is doing what, and as a player it allows one to put a bit more focus on the roleplaying side of things. It's a minor thing, but something that struck me.

Jewels of the Carnifex is an adventure of twists and turns, and no greater one than in the last encounter. PCs can do very well for themselves, but as always, not everything is as it seems. Harley really has done a great job with this adventure. I can't praise him enough.

Even the wrap up after the adventure isn't neatly tied up with a bow as it often is in other adventures. There is much more here than meets the eye.

Crap - I'm sounding very cryptic, but this adventure is not as straight forward as it seems on the surface. As such, it should be a blast to run (and play in)

The maps are, as always, excellent. I'm going to sound like a broken record - "Joseph, start offering prints of these maps damnit!"


At the end of a forgotten back alley, in the weird and otherworldly marketplace of faiths known as the Bazaar of the Gods, stands the ruins of a forgotten chapel. Once the cult of the Carnifex was celebrated throughout the City of a Thousand Gates. But a band of holy warriors rose against the cult of executioners and torturers, casting down her signs and scattering her devotees to the winds. The fate of the cthonic goddess, and – more importantly – her fabled jewels remains a mystery…until this night.

Set amid the sprawling decadence of Punjar, Jewels of the Carnifex offers low-level adventurers a chance to plumb the mysteries beneath the city’s soiled streets, explore forgotten crypts lavished with weird artifacts, and – for the quick and daring – claim the lost Jewels of the Carnifex!