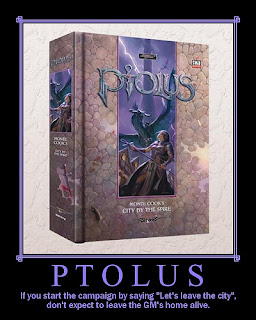 So far, 2 of Raggi's 19 projects have funded - Jeff Reints' Brood Sky Fortress (very tempting) and Vince Baker's The Seclusium of Orphone (probably great to play and annoying as all shit to read). There are approximately 29 hours left in the funding process.

Vince got himself over the hump by offering free PDFs of his work to any that pledged over a certain amount. It seems it was a good tactic, as it worked.

Monte Cook has now gotten into the act, offering PDF copies of Ptolus to those that pledge $100 or more to The Unbegotten Citadel. To fund, Monte needs to raise almost $4800 for his project. If it funds, you would get up to 5 other funded project from the 19. As it stands, there are two, although Kelvin Green's Horror Among Thieves has crossed the halfway mark.

I have Ptolus is hard cover. It's an awesome book. It is huge. I'm beginning to think the PDF would be nice to have, just for the ease of reading it on a table - but then again, I must have the Phtolus disk that came with the preorder and has the book on PDF.

Ptolus is also a few years old at this point, but does gaming material ever really go old?

I think I'll be putting money down on Reint's and Green's projects over the next day myself.

Here's the deal on Monte's project:

July 30 Update: $100+ contributions get Monte Cook's Ptolus: Monte Cook's City by the Spire in PDF form should the project fund!

July 23 Update: $30+ contributions get a 16 page sandbox setting by Rob S Conley (Majestic Wilderlands, Points of Light 1 & 2, etc.) in print + pdf as an added Extra. Not to be released in any form outside these campaigns. Grab Bag contributions get to choose their adventures (up to 6). $160+ get an exclusive 64 page James Edward Raggi IV LotFP adventure. Not offered in this form outside these campaigns.  See the Updates tab for full details.

Lamentations of the Flame Princess presents The Unbegotten Citadel by Monte Cook, illustrated by Eric Lofgren

No one remembers the origin of the ruins in the hills. And to be sure, there's little left of the place, whatever it was. Some think that the strange black rocks were once part of a wizard's tower. Others believe that the massive red-veined stones were part of the temple to a forgotten god. But when the local herdsmen begin to notice that the ruins are becoming more substantial each day, resembling more and more a true fortress, seers and prognosticators relate what might be the truth: a dark citadel that moves backward in time, from ruin to creation. But what doom lies within, once the Unbegotten Citadel stands again? And what does it portend for those in the quiet lands around it?