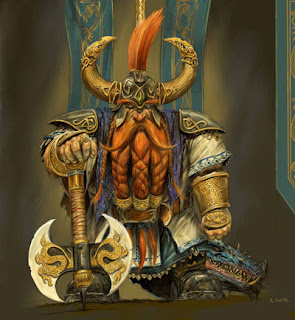 Yep, The Grumpy Dwarf here, back with part 2 of Mike Mearls' endless Reddit Q&A.  There's more after this post, as a Dwarf can only do so much in one (or it it two now?) sittings ;)


Answer 5 (of the answers I'm picking - skipping a few)

We're looking at a set of maneuvers that characters can dip into to gain more concrete options in fights, along with options that you can use to push yourself beyond your limits for an action or two per encounter (encounter powers make their return - 4e players, this is for you - enjoying the crumbs?).

We're strongly considering adding a free attack if someone breaks away from a melee (isn't this an "Attack of Opportunity?  I never even realized they removed it). The playtest feedback has been a little soured on letting people move around without consequence. (ya think?) However, the rule would be much simpler than attacks of opportunity - likely it'll be that if you start your turn in someone's reach, they get an attack on you if you try to leave their reach using an action to withdraw. (so you can run by or run through them without consequence?  i so much prefer Theatre of the Mind)
Answer 6
I think that as the game takes shape, the breadth of mechanical options for DMs will make this game stand out as the next step in D&D's progression (time will tell).

This is the first time that we're building D&D from the bottom up to account for house rules and expansion. The simple rules we've shown off so far are about as complex as we want the core (so this is the OSR or 0e game they are trying to emulate? because if it is, they got it wrong). I want the game to be easy to understand not just from the POV of learning how to play, but also in terms of understanding how all the parts work together.

Once you understand that, you can much more easily house rule, add rules modules, tinker with things, and otherwise make the game yours. Really, our goal isn't to make everyone happy by making a game (now there's a surprise). It's to make a range of options that any individual DM can modify and reconfigure to make the specific type of D&D they always wanted and that no other edition was able to exactly deliver. (but i get to do that with a handful of house rules to ACKS - they are going to do an OSR style game better with the current base rule set?)

Of course, some people will be perfectly happy with an older edition. (yep) If that game is perfect for them, I'm not going to try to force them to buy into Next or leave the game they love. (but we'd love for you to check it out and buy a copy - just in case ;)

In some ways, this is a shift back to independence, back to the 0e feel, but with a really welcoming starting point for people who have never played D&D before. (0e "rewritten", such as S&W White Box is pretty simple to understand and is fairly welcoming)

Answer 7 (re: 4e)
As I mentioned above, we're working right now on a maneuver system for fighters and other characters (is this a feats deal?). In addition, we're looking at alternate magic systems for casters other than the wizard and cleric.

Also, we're 100% committed to taking the same approach to balancing the math behind the game (do we really need the game to be so closely balanced?  doesn't that take some of the soul from the game?) and improving upon the 4e tools for encounter, NPC/monster, and adventure design (sweet!  recipes for perfectly balanced encounters! sigh).

For caster supremacy, the key lies in attacking it from both ends. We can do a lot by reining in the most abusive spells and making it harder for casters to chain things together in abusive combos (if this is anything like the combo that mike talked about it one of his posts, i saw nothing wrong with the combo - it was smart play - and the saves required should have made it a rarely successful occurrence). The other end is making sure that we make an honest comparison of the casters to the non-casters.

For instance, if a wizard can turn invisible we have to be cool with rogues having an almost entirely assured chance of success to hide or sneak up on people (how is this unbalanced?  the game was like this up to at least 3.5e, and it played fine). It's unbalanced if the guy who is supposed to be stealthy has a real chance of failure, while the wizard's magic has 100% chance of success of turning someone invisible (skills have no limit to use - spells have a limited number of castings - therein lies the balance) .

For skills, we definitely will have them in some form to give people pointers to the non-combat stuff they are good at. Right now, classes give skills as appropriate but most of your skills come form your background. Backgrounds are not linked to class, so a fighter can choose the criminal background to become stealthy or good at picking locks (so what is a thief / rogue good at anyway?  or are we going to give spells to all the classes to?).

The key discussion we're having right now with skills boils down to this - does a skill make you better than you otherwise would be at something, or does it make you strictly good at it?

Making you better would be a +3 bonus, which is then stacked on top of an ability modifier. So, a Wis 9 rogue (ahem) would be better at finding traps, but still only at +2 (wouldn't INT be just as useful for finding taps if not more so?).

The second path removes abilities from the equation. The rogue would just have +5 to find traps. You'd use either an ability mod or your skill, rather than stacking them. (which makes ability mods relatively useless outside of combat)

We've been arguing back and forth on which path works better. Neither has emerged as a clear front runner.
Thats the end of Part 2 - more tomorrow night