Free RPG Day was this past Saturday, and the freebies are now starting to make their roll-out in PDF form.

Lets see what Quick Starts we have so far (I'll post up adventures tomorrow):

Cosmic Patrol: The Kahn Protcols - Blast off into the dangerous cosmos with The Kahn Protocols, Cosmic Patrol's addition to Free RPG Day 2012. This rules-light system will have you fighting lizardmen and saving the universe in no time at all! Are you ready for the challenge? 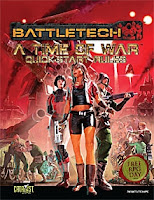 BattleTech: A Time of War: Quick Start Rules - These A Time of War Quick-Start Rules will have you and your friends adventuring in the BattleTech universe in no time! A part of Free RPG Day 2012, these rule are the perfect way to get starting roleplaying BattleTech. 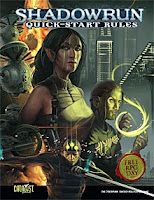 Shadowrun: Quick Start Rules -  Want to relive the adventure from Free RPG Day 2012? Or did you miss it and want to see what all the fuss was about? These Free RPG Day Shadowrun Quick-Start Rules are the perfect way to jump into the action of the Sixth World! (Note - there's already a review stating great production values but pretty much unusable as a quick start - I might have to get Grumpy to take a peek later on this week - damn shame as i would have liked to see how the new Shadowrun rules play out). 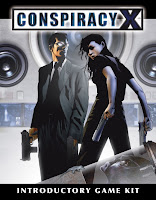 There is a war being waged behind the scenes.

A war between secret government agencies and alien invaders.

It is one of your first missions working for the secret conspiracy Aegis. Dedicated to protecting humanity from alien threat, they come under constant attack from the government conspiracy known as the National Defense Directorate, a group of alien collaborators working with at least two of the known alien races that could bring about our own race's extinction.

A crashed alien craft has been recovered by an Aegis Cell, but at terrible cost. Most are dead, only their tech support survive and it is up to you and your newly formed Cell to take this alien technology to Aegis. The NDD are aware of the craft, the know where it is, they know where you'll be taking it, and danger awaits at every turn and intersection. You cannot let this technology fall into enemy hands, but who can help you when you can trust no one?

Inside you will find:

• The complete Convoy adventure which can be played in one or two sessions, and can launch the characters' new careers working for Aegis leading to months of play.
Posted by Tenkar at 8:19 PM