The Thief, The Thief and the Thief in the Dungeon Crawl Classics RPG 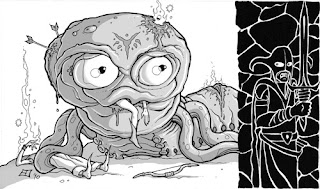 Why is it Thief x 3?  Because the Dungeon Crawl Classics RPG breaks up the Thief Skills not just by level, but also by alignment.  Lawful, Neutral and Chaotic.  It's an interesting way to specialize the class.

Some quick observations (and a handful of accompanying questions):

I can understand why Chaotic Thieves would be the best at Backstabing, but why why are Neutrals a distant third and Lawfuls a fairly close second?  I would have thought those two positions to be reversed.

Why are Neutral by far the best at Forging Documents?  That seems more Chaotic to me... or possibly even Lawful (depending on how the documents are being used.

Why do Chaotics suck at Picking Pockets, yet Lawfuls and Neutrals excel?

The standard array at 10th level breaks down as the following for all - 8,8,9,9,13,13,13,13,15,15,15,15.  That array applies to all three alignments, it's just assigned differently to each.  The Neutral Thief has a die one size larger than either Lawfuls or Chaotics when it comes to casting from a scroll (casting from a scroll uses a different resolution system than the other Thief skills) which means that if you are purely crunching numbers, the Neutral Thief is the best choice.

The Thief ability to "Burn Luck" and recover lost luck may be hugely powerful in game.  I really need to see how this plays out, but any system where you can add another die to you die roll is a huge boon.

Alright, enough on thieves.  Time to read my PDF of the just released DCC #68 - People of the Pit.  Review will be forthcoming.