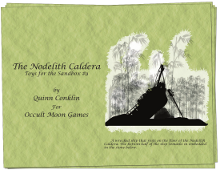 Yeah, I've fallen behind in my Toys For the Sandbox reviews.  I think the folks over at Occult Moon are up to #11 and I'm just hitting #9.  Ah well, I'll catch up at some point.

Well, this caldera has a galleon (a ship) embedded in it's rock wall.

As usual with the Toys for the Sandbox series we get a map, 6 hooks with 3 twists each (giving the GM 18 different possibilities to play with.  The nice thing about this entry in the series is that the hooks aren't exclusive... you can run with more that one, which gives this a lot of gaming potential.  We also get 4 NPCs, an encounter table and a rumor table.


From the steamy green of the southern Jungle the long dormant volcanic cone of Mount Nordelith rises. This once fiery mountain holds many secrets including a shipwreck, tales of the Ghost Dragon and a flying squirrel with a problem.


In the 9th issue of Toys for the Sandbox our exploration of this dormant volcano reveals flavor text, maps, 6 adventure hooks with 3 twists, a list of rumors and possible encounters.


Like the rest of the series you get all of this for 99 cents.