Looking Back at The Morrow Project 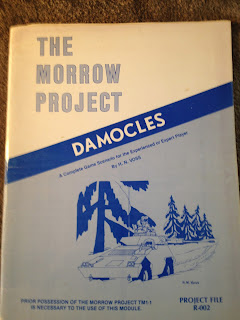 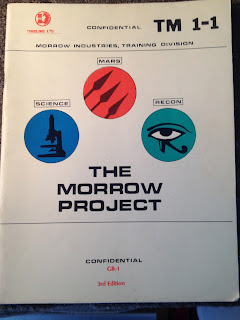 Over the next couple of days I'll be posting pics of some of the older or more obscure stuff in my gaming collection.  This one is of The Morrow Project.

One of my friends dearly wanted to play in a Morrow Project campaign.  He owned the books, I didn't, but he gave them to me with the understanding that I would run, or at least "attempt to run" it as a campaign.  It never happened.

I just couldn't find the "system" within the rulebook.  Sure, I can find blood transfusion charts, radiation exposure charts and numerous weapon charts, but it's a confusing mass of rules that is nearly impossible to navigate.  It required way too much effort, especially after Twilight 2000 was released by GDW.  Although far from a perfect system, Twilight 2000 allowed for a gaming experience that was "after the bomb" so to speak.

This got put on a shelf and pretty much forgotten about, until I pulled it from a box destined for storage this morning.

Lot's of memories even if it was never played.
Posted by Tenkar at 4:53 PM

Email ThisBlogThis!Share to TwitterShare to FacebookShare to Pinterest
Labels: the morrow project