Mini Review - Path of the Delver (For Labyrinth Lord)

We're doing pretty well with the Old School module releases recently, at least if you are looking for low level adventures.  Path of the Delver from Knightvision Games is the latest OSR release on RPGNow. 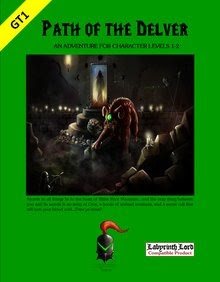 At quick glance, it has some highs and some lows, but that's to be expected for the first release from a new publisher.  First, the lows:  The map of the town of Castle Wickersham is pretty useless.  It is muddied and unkeyed except for the scale.  The outdoor map actually looks pretty useful, but again lacks a map key AND a scale in this case.  The dungeon maps look pretty well done, but again, they lack a scale (is it 5' or 10' on the grid? - 5' judging by the description of cavern room 18).

On the plus side, there are some player handouts, a new Cleric Spell, 9 new magic items and a dozen new monsters.  The whole thing, including the OGL, clocks in at 48 pages.

"Secrets to all things lie in the heart of Bitter Root Mountain...and the only thing between you and its secrets is an army of Orcs, a horde of undead creatures, and a secret cult that will turn your blood cold...Dare ye enter?"   Path of the Delver is a Labyrinth Lord and AEC compatible adventure designed for 1st and 2nd level characters. Set in the upcoming Ebonyr campaign setting, it can also fit into any generic RPG world. The adventure combines urban, wilderness and a classic dungeon crawl.   Inside the PDF you'll find:

* Over  9 new monsters including the Lessor Demonos and Mogren