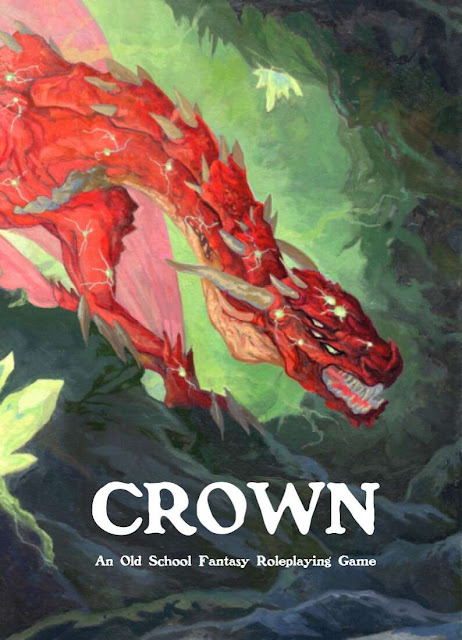 Before anyone asks the question "why do we need another OSR ruleset" I'll answer the question - the OSR must continue to grow if it is to survive and thrive, and no one says you must enjoy every OSR ruleset - let alone own it. That being said, I enjoy reading new OSR rulesets as I almost always find a rule or three that I'm tempted to include in my own old school gaming. Crown certainly has its share of inspiration to give.

Crown itself is a hack of Whitehack, but skews more towards its old school roots than Whitehack does, in my humble opinion.

In a mere 60+ pages, Crown includes rules for sea travel, ship to ship combat, dehydration, foraging, and more. As I said, inspirational material I can use with other rulesets.

Crown is 6 bucks in PDF. There is not currently a print option.

Crown is an easy-to-learn, rules-lite old school fantasy roleplaying game. In a compact sixty pages it contains all the rules you need to set out on perilous adventures, dangerous journeys, and harrowing quests. This is a complete game based off of Whitehack and strongly influenced by games like Maze Rats and Whitebox: Fantastic Medieval Adventure Game. These rules are compatible with other OSR products with only a little conversion. The book is split into two parts, the first half is intended for both the players and the Game Master (you can find these rules for free in Crown - Player Rules https://www.drivethrurpg.com/product/319366/Crown--Player-Rules?manufacturers_id=5958) and the second half is full of tools and advice for the Game Master.

Advice for running old school games. Rules for dungeon crawls. Rules for hex crawls. Stronghold and domain guidelines. Simple warfare rules based on traditional "handful-of-d6" wargames. Tools for making spells and dealing with the various arcane powers that can occur in old school games. Tools for making retainers and other nonplayer characters. Quick and concise tips for granting treasure. Basic rules for monsters and converting from other OSR products into Crown. A short bestiary containing 45 common fantasy monsters with easy-to-use explanations.

Yep, those are affiliate links above. Affiliate links fund all things Tavern as well as keeping the taps flowing nice and cold ;)