Kickstarter - The Greatest Thieves in Lankhmar: A DCC Boxed Set 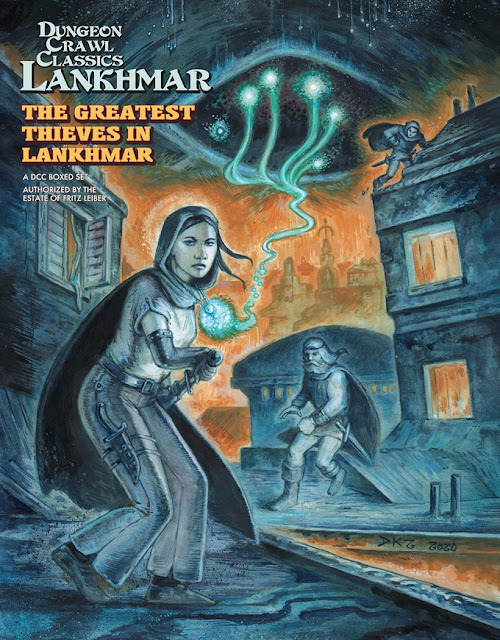 Goodman Games produced the Lankhmar setting boxed set via Kickstarter prior, but the new Kickstarter: The Greatest Thieves in Lankhmar literally stands alone. If you don't own the prior Lnkhmar boxed set, it "includes a primer on DCC Lankhmar rules, so you can play it with simply the DCC RPG core rulebook."

The Greatest Thieves in Lankhmar boxed set in print and PDF is merely 50 bucks. I suspect I'll soon own more Lankhmar ;)


From the most famous city in the history of fantasy comes a sword-and-sorcery adventure to test the finest gamers! The Greatest Thieves in Lankhmar is a level 3 Dungeon Crawl Classics boxed set that sends characters into the hot cellars beneath Thieves’ House, across the sooty rooftops of the City of Sevenscore Thousand Smokes, and on to a mad dash through the palace of the Overlord. Featuring design leads Harley Stroh and Marc Bruner with cover art by Doug Kovacs, this boxed set comes with everything you need to run an epic adventure over several sessions, whether you run it as a tournament or as part of an ongoing campaign.