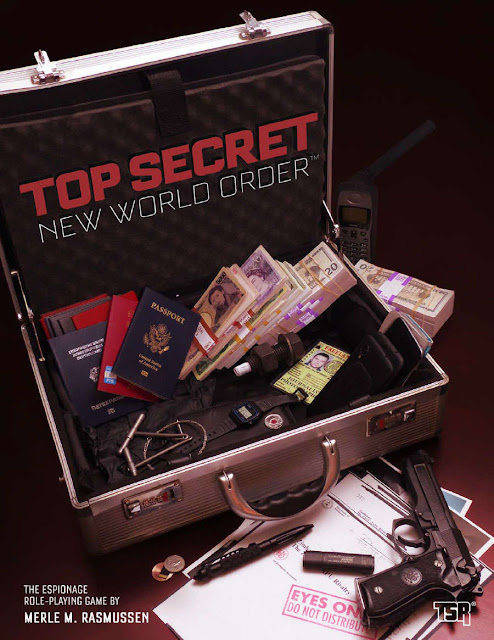 Rach and I got to playtest Top Secret / New World Order a handful of times with Merle Rasmussen behind the screen at various NTRPG Cons over the years. Actually, I think a very early playtest was before the game was publicly announced. It was a no brainer for me to back it when it Kickstarted. sadly, like 98% of my gaming purchases these days, it's sitting on a shelf. I guess I'm more of a collector these days ;)

Today's Deal of the Day at DTRPG is the Top Secret / New World Order PDF. Normally 19.99, until tomorrow morning its on sale for 9.99

The time: now. The place: everywhere.

Your mission: preserve peace and stability in a world rife with conflict, mistrust, duplicity, and shadowy organizations.

You are an agent of ICON: The International Covert Operatives Network. You have been recruited from your former life, trained in the ways of tradecraft, and sent into the field to handle the missions that other agencies cannot, or will not handle.

One player is the Administrator, describing and controlling the game world, while the other players take on the role of international spies, working behind the scenes where governments won’t go.

Tense negotiations, dangerous combat, thrilling car chases, tradecraft, surveillance, intrigue, and subterfuge are all at hand with the roll of the dice.

Email ThisBlogThis!Share to TwitterShare to FacebookShare to Pinterest
Labels: deal of the day, top secret