New PWYW - The Trials of a Young Wizard (OSRIC) 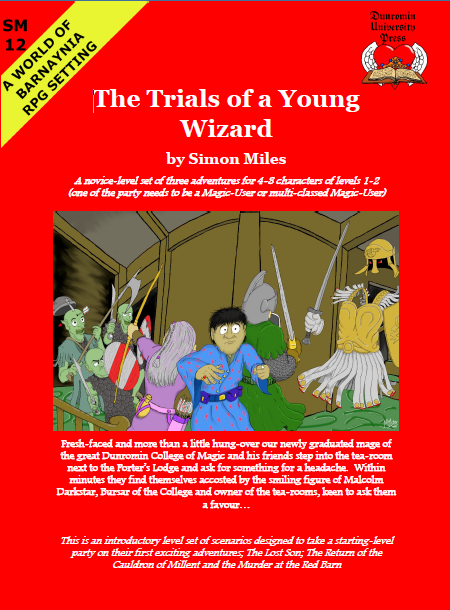 Its been a while since I highlighted a PWYW release here at The Tavern. It being Christmas Eve (and only a few minutes until Christmas here on the East Coast) I figured I'd highlight a PWYW OSR release, sort of as an early Christmas gift.

The Trials of a Young Wizard is an exciting entry-level set of three scenarios:

Fresh-faced and more than a little hung-over our newly graduated mage of the great Dunromin College of Magic and his friends step into the tea-room next to the Porter’s Lodge and ask for something for a headache. Within minutes they find themselves accosted by the smiling figure of Malcolm Darkstar, Bursar of the College and owner of the tea-rooms, keen to ask them a favour…

This is a first level set of scenarios designed to take a starting-level party on their first exciting adventures in the Land of the Young; The Lost Son; The Return of the Cauldron of Millent and the Murder at the Red Barn.

You can run this set of scenarios in your own game-world or use it as a gateway and taster for the wider gameworld setting of Barnaynia - the banana-shaped world, starting in Dunromin, the most amazing city in the Land of the Young, probably the world.  This highly detailed and quality set of game resources is both thought provoking andf enjoyable.  It is detailed yet flexible, complex yet easy to use.  The ideal gameworld for any sort of player and Game Master.

SM12 The Trials of a Young Wizard was designed with AD&D in mind but set in the OSRIC ruleset.  This is the latest dungeon designed as excellent value for money and an easy fit to any fantasy role-playing campaign.  However,  The Trials of a Young Wizard is primarily aimed at the game setting the Free City of Dunromin and the Land of the Young on the astonishing World of Barnaynia.

Yep, that's an affiliate link above. Affiliate links keep the lights on and the taps flowing here at The Tavern
Posted by Tenkar at 11:53 PM