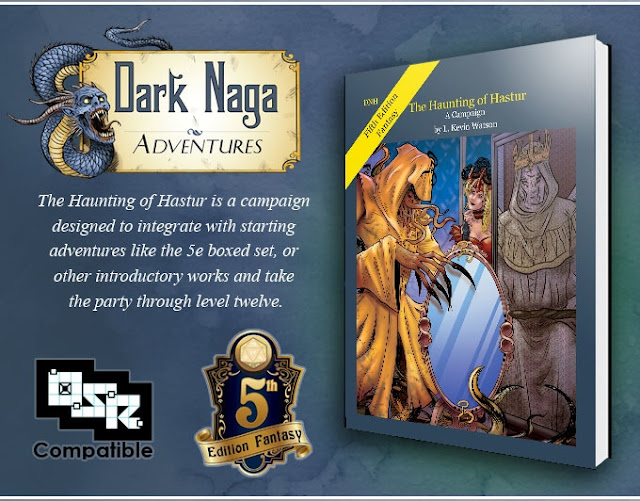 I've thoroughly enjoyed the individual releases in the Haunting of Hastur line of adventures from Dark Naga. Of course, the later ones were written for 5e and I would have had to convert them to run them. I almost backed the limited print run of the 5 adventures as a bundle in the OSR format but the stars didn't align, so I'm thrilled to see an OSR version as an option with the latest Haunting of Hastur - Hardback - 5e and OSR Kickstarter.

This is an omnibus collection of the five released adventures and it comes with Virtual Table Top (VTT) ready maps. Fog of War, here I come!


The Haunting of Hastur is a campaign designed to integrate with starting adventures like the 5e boxed set, or other introductory works and take the party through level twelve.

The party members start out on a job to investigate missing people and are pulled into a confrontation with those who would bring Hastur back to the world.

The campaign is a non-linear adventure that leaves a lot of room for roleplaying.

The book will be about 240 pages, case bound hardback with a full cover interior on 70-pound paper. This tome includes the following adventures: DNH1a – Sidequest – River Crossing, DNH1 – The Lost Temple of Forgotten Evil, DNH2 – The Buried Zikurat, DNH3 – The City of Talos (Adventure, Gazetteer and Bestiary), DNH4 – Confronting Hastur, and DNH5 – Carcosa. All of which have been previously run as individual projects on Kickstarter to publish the old school, detached cover module prints.

The PDF rewards for this campaign include the PDF versions of the Complete editions of the five individual modules. The complete version includes the 5e, OSR and in two cases, the Pathfinder version of the adventures.

I should mention that Kevin is having the original B&W art colorized for this release.

30 bucks get you the Digital Complete level - everything in PDF, including both OSR and 5e versions.

70 bucks get you the Hardcover print copy in either OSR or 5e, plus everything listed in the Digital Complete backer level.