Deal of the Day - Dungeon Full of Monsters (Modular Megadungeon) 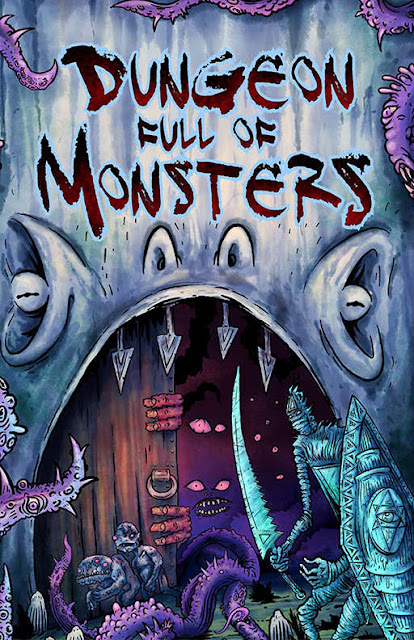 Today's Deal of the Day is Dungeon Full of Monsters, a modular megadungeon. Normally $15 for this 352-page monstrosity, until tomorrow morning it's on sale for $7.50 in PDF.

Dungeon Full of Monsters is a modular megadungeon for use with Labyrinth Lord and other old school fantasy role-playing games.

The Dungeon is Modular

The megadungeon is composed of 50 individual sections, separated into 5 different levels. You can assemble these in any configuration you like, either randomly or not, either before the campaign or on-the-fly in play. You can also use these sectiosn on their own, without reference to the larger dungeon itself.

And Full of Monsters

The second half of the book contains dozens of monsters, illustrated in full colour, often with multiple variations and types. Combined with the unique monsters located in specific dungeon sections, this book contains over 150 different monster stat blocks. There are criminal organizations, insane cultists, meddling deities, evil wizards, undead kings, infernal demons and other invaders from beyond the stars, numerous unspeakable horrors and arcane beasts, and even a few rival adventurers. Use these monsters with this dungeon or any other.

Specific conversion guidelines for The Nightmares Underneath are also provided.

Dungeon Full of Monsters was written by Johnstone Metzger and illustrated by Nathan Jones.

Yep, that's an affiliate link above. Keep the lights on and the beer cold by shopping via The Tavern's affiliate links.
Posted by Tenkar at 8:23 PM

Email ThisBlogThis!Share to TwitterShare to FacebookShare to Pinterest
Labels: deal of the day, megadungeon, osr sale