Ah, sweet #ConManKen. Never at a loss to make folks laugh. See, Kenny took to Facebook Live for a live sale yesterday and my, the laughs were flying. And yes Kenny, folks were laughing AT you.

Now, it WAS authentic Kenny as you will see from the following shots taken by one of The Taverners" of the scroll at the bottom of the feed:

Some folks went s far as commenting about Ken's Kickstarters that he's failed to deliver, failed to update - fuck it, he's basically a failure.

Then Kenny complained about the Trolls - he started deleting posts and blocking people:


He also made the statement that those trolling were in violation of Kentucky Law for causing a loss of business and it was a Class D Felony. I couldnt find the relevant law.

The following does, however, seem potentially relevant:

Kenny, can you quote us the law you are threatening folks with in the above format? It may help.

Because folks want to know which law you are threatening them with via PMs: 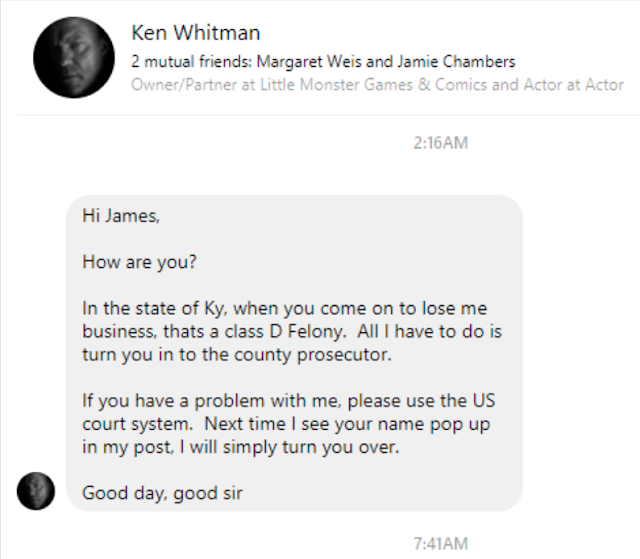 Turn you over and pour you out...

Kenny, where's my FBI Agents? I've had tea and coffee cake ready for them for 15 months and they never came. What was the federal law that I was violating again?