Work Continues on Getting the Hero's Brew Podcast to Your Ears 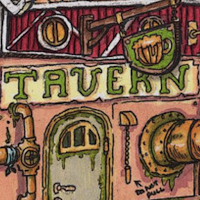 As I mentioned in last night's Tavern Chat, I had to drop out 30 minutes early to join a Skype conversation with my fellow Hero's Brew conspirators, +James Spahn and +Glen Hallstrom . What were we discussing? All things Hero's Brew.

Now, if you don't know who James and Glenn are, let me give you their bonafides:

James is perhaps best know as the writer of White Star, an OSR scifi RPG based off of Swords & Wizardry White Box. He has self published over 100 releases for Labyrinth Lord, Swords & Wizardry and his own White Star RPG. He's also written for The One Ring RPG with over a half dozen writing credits for that system and of course, The Star Wars RPG for FFG.

Glen has been podcasting for ages. THAC0's Hammer, Save or Die, The Brainstorm and others I'm sure I have forgotten. Glen's done radio work and stage acting. He does voiceovers for numerous podcasts. He has his own YouTube channel - Old Man Grognard where he discusses topics relevant to the OSR.

The three of use were the hosts of Save or Die: Expert Edition. I consider them both close friends with whom the three of us share gaming chemistry.

As for me, I write a blog, have dabbled in podcasting and create some gaming content on an irregular basis.

Anyhow, these are your hosts for Hero's Brew.

Right now, we have the embedded player up on the right side of this page. All we have up is the intro, but soon - soon there will be more ;)

We will be posing questions to the community as this literally is a podcast for the OSR community. We want to be responsive and work hand in hand with our listeners. More on that soon.