Deal of the Day - Exiled in Eris (Swords & Planet) 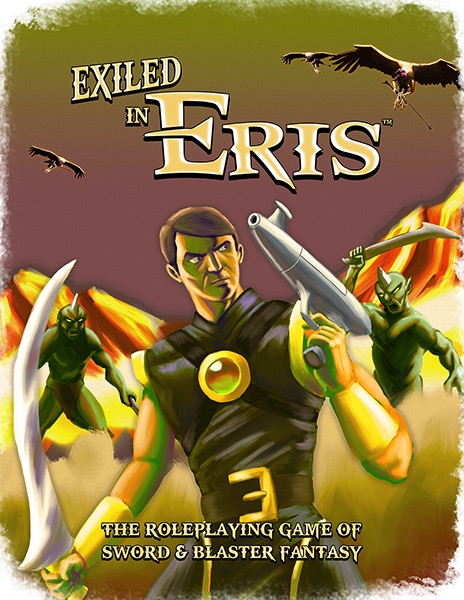 When it comes to most Deals of the Day that I highlight, I already have the product in question. Others I don't but I control myself. The number of unread coming products I own, both print and PDF is scary.

Exiled in Eris I don't own. I want to own it. Sight unseen, I want to convert it to Swords & Wizardry. Is that bad?

Hunt for lost treasures among the ruins of a bygone age in this roleplaying game inspired by classic pulp tales of Planetary Romance, Sword and Sorcery, and the Wild West. Swords, blasters, and sorcery mix with monsters, robots, and aliens while searching for fortune and adventure amidst danger and intrigue. All this awaits in the desert no-man's land of the distant future.

Imagine the wild west with swords and Seventies-style blaster pistols. Imagine a female espionage agent in a futuristic skin-tight bodysuit and a Clint Eastwood-style poncho karate kicking an orc in the face. Imagine a grizzled veteran and his buddy, a robot from a proud lineage of noble warriors, cracking open the tomb of a long-dead king only to wake the immortal, six-legged, genetically-engineered guardian beast from its thousands of years of suspended animation. That is Exiled in Eris.