RPGNow Deal of the Day - Graveyard at Lus (White Star) - Just a Buck! 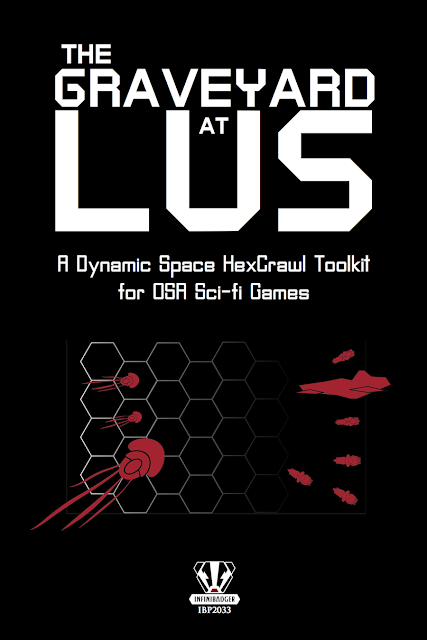 I have Graveyard at Lus in hardcover and it is an excellent OSR space supplement, especially for those that like to sandbox. +Jason Paul McCartan went off his rocker and has priced the PDF at a buck for the next 24 hours.

So, what do you get for your buck?

-A comprehensive toolkit for creating space Graveyards - the result of battles between forces at war in the stars
-Multiple tables for the creation of starship damage, system damage, and crew survivorship
-An event table to ensure that exploration is dynamic during sandbox play
-New rules for Cinematic and Realitic space combat
-New starship technology including sensors and rules for targeting/repairing specific systems
-Additional rules for space-based phenomena, space-based explosions, and boarding other starships
-Four new alien races for your White Star RPG campaigns
-Updated starship usage for four of the core alien races in the main game
-Five new creatures, including The Unquiet, a horriffic form of undead
-Use the pregenerated Graveyard At Lus for your own games, or as a guide to create your own Graveyards.
-Worksheets and sample hexmaps at the rear of the book to help with generation of Graveyards

Infinibadger - the fucker is simply INSANE! (any relations to Crazy Eddie are purely coincidental)
Posted by Tenkar at 11:25 AM