Remember the Dragonwars of Trayth Kickstarter "Meltdown" at The Tavern? It's been Released as a Free PDF on RPGNow 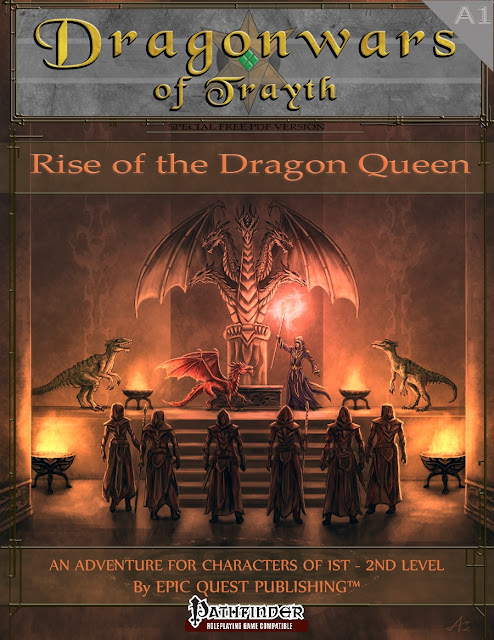 My God. I remember the Dragonwars of Trayth Kickstarter fiasco like it was yesterday. Actually, it was October of 2014 but hey, whose counting?

The posts regarding this Kickstarter probably generated more comments than anything else that's been discussed here at The Tavern, and that's not including the comments from one of those involved in the KS that were subsequently deleted (but saved as screenshots for the sake of history and entertainment value).

Tales from the Backwater Tavern

So, here we are and the first installment of a 25 piece epic series known as Dragonwars of Trayth (yes, 25 parts) is available as a free download on RPGnow. Oh, and a free character sheet download (ignore the misspelling in the file name, "character" is spelled correctly on the actual sheet. DO NOT print out all four pages, the first two are simply ads and color ink killers)

Did I mention you can get the character sheets in Pathfinder and OSRIC flavors but the module is only available for Pathfinder thus far.

You know you want to. I WANT TO. And I shall. It is, sadly, pushing away other titles from the top of the review pile (Ed Greenwood's the Terrible Revenge of Simpering Malexineuss the Pretender may still go first)

Remember, the download is free and your time is precious.
Posted by Tenkar at 7:58 PM