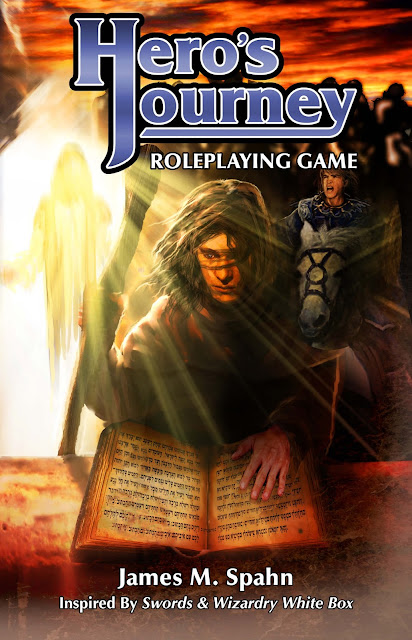 I've gotten on +James Spahn 's ass for not letting me know about his new releases, often finding out from The Tavern's readers or from my daily peek at RPGNow's releases. This time, James is giving me more than ample lead time ;)

I've seen some of the text to Hero's Journey and I'm excited to give this a run for it's money with my regular gaming groups. James has also promised me I'll have access to a copy of the rules prior to NTRPG Con, so add Hero's Journey to the list of games I'll be running (StarSlinger was pretty much a list of one prior).

At over 200 pages, this single-volume book will include everything players and referees need to play. Hero's Journey will be available in PDF and 6" x 9" digest format through One Bookshelf. Print on Demand copies will be available in both black and white interior and full color premium interiors.

Scheduled for release in the third quarter of 2016.

I'll try and squeeze James for some game-able advance pieces as Hero's Journey gets closer to release. James did tell me it's "more lethal than White Box" ;)
Posted by Tenkar at 2:02 PM