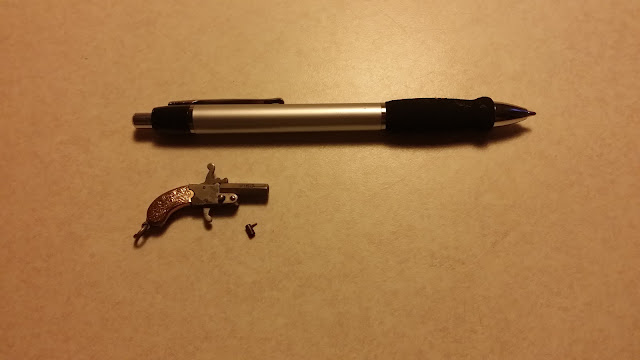 So, my mother was going through some of my grandmother's stuff and she found this one shot firearm that was worn like a charm. My grandmother got it in Tahiti back around 1914 or so on her honeymoon. There was also an article about a cop removing this from a drunk driver who had worn it around his neck, cocked. Cop shot himself in his finger. Ouch!

It got me thinking - what could still work miniaturized in D&D? Wands are the most obvious choice. Wear one around your neck and no one would be the wiser until you broke it out and mini-fireballed someone's ass. Or mini magic missiled. Actually, the effect does not have to be miniaturized in D&D, just the item itself, although a DM could easily rule either way.

Miniaturized potions could be held between cheek and gum, ready to be bit down on much like a spy's poison pill, but this could hold a healing potion or invisibility.

Maybe a magical 1" long crossbow still fires a bolt that does full damage.