Morath Ogre - A Creature for Swords & Wizardry and White Star 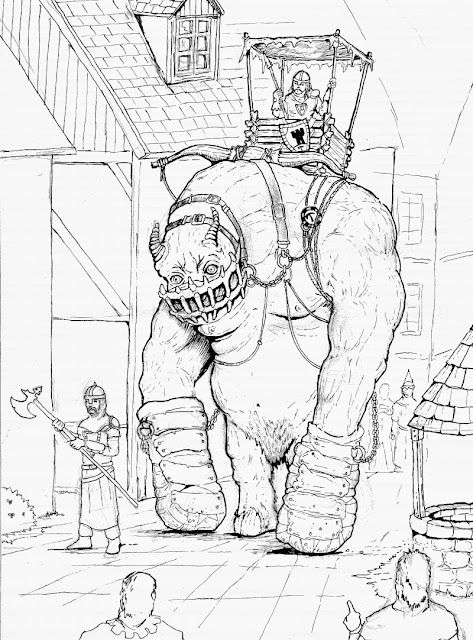 Morath Ogres are bred to be walking watchtowers, allowing watchmen an extended view of an otherwise visually obstructed urban environment. Their hands are wrapped in hide and leather while their arms are extra long, serving as a second set of legs and offering a steadier ride for the watchman stationed above. Their mouths are covered by what is effectively a barred mouth brace. Morath Ogres with unwrapped hands and unbraced mouths have been known to snatch random creatures and pop them quickly into their mouths for a meal. Their are especially found of sentient "teenaged" or pubescent creatures, as the raging hormones add to the flavor of the meal.

Morath Ogres stand 12 to 14 feet tall at their shoulders and are believed to be a crossbreed of standard ogres and cloud giants, but they have the intelligence of neither. To cut down on their innate aggression, all male Morath Ogres that are not used for breeding are gelded as early as possible. Morath Ogres do not like heavy rain, as it causes the leather wrap around their hands to constrict which imparts pain on them that they rarely feel. They have been known to panic and lash out in prolonged, heavy rains.

The watchman stationed on a Morarth Ogre lights a green lantern on his tower post from dusk to dawn. This light allows the populace to know that a watchman is nearby.